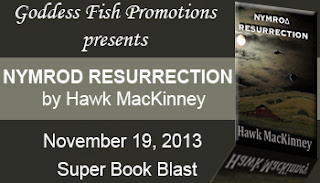 BLURB:
Investigating an unlikely murder, Ex-SEAL and part time PI Craige Ingram discovers an officially sanctioned assassination.  His investigation quickly stirs beyond the dirty backrooms of the nation’s capital with more killings across Europe and the Middle East.  The dead woman is somehow connected to stolen artifacts from a time before Babylon.  As he probes apparently unconnected clues, he locks horns with an enigmatic enticing secret agent with her own agenda and her own way of doing things.  Craige faces train wrecks and deadly assassins doing business with a rich mercenary selling biotoxins, rare stamps, deadly nerve gases, and smuggled nuclear material to the highest bidder. As Craige peels away at the shadowy Operation Nymrod, he finds an elusive power-hungry dead-set mind – a driven obsession with a frightful arsenal of bioweapons ready to fulfill ancient prophecies with a very personal Armageddon that makes the monstrous last day of the twin towers of the World Trade Center pale in possibilities.

EXCERPT:
For years I'd used the old house for everything from a hay barn to a tractor shed.  The split shake roof was next to nonexistent.  Rafters and studs rotten and termite honeycombed from subflooring up.  Termites long gone, courtesy of nearby mounds of fire ants.  The hackberry tree off its back porch looked solid until that hail and windstorm.  A blue-white crack of lightening split through its rotted heartwood, toppling the trunk across what was left of the wobbly canted bricks of the chimney.  The storm cleared leaving the shaky stump of the fireplace and knobby chimney jutting up out of a tumbled pile of bricks.  Bright sunshine slashed across pearly teeth in a decomposing skull; the neat bullet hole bull’s-eyed just below the hair line.

It wasn’t long before Lucky was pawing at the back door.  Yelping that peculiar excited bark I've learned not to ignore.  The last time it was a possum with her litter.  "Okay, come on...show me what you found."

He gave a sharp high-pitched yip.  Pulled away for a few yards.  Stopped, looked back, made sure I was following.  Then took off across the soy bean field toward the airstrip.  Stopped ever so often.  Looked back, checked to make sure I was still coming with him.  He disappeared over the top of the low rises behind the hangar.  When I topped the rise, I saw the storm damage to the old house with Lucky up on the tumbled chimney’s pile of bricks—tail wagging, looking down.  Getting closer, I spotted what had gotten him so riled.  Pieces of field mouse chewed cloth poked out from under the bricks.  After pulling back several, it didn't take an expert to recognize the mildewed remnants of clothing sunk against desiccated skin gnawed down to gleaming cheek bones.  I left Lucky to guard.  Hurried back to the house.  Brought back my digital camera.  Photoed the body, the surrounding area, the smears of hydraulic fluid on the runway and grass with the matching set of wheel marks.  Each set in landing gear positions, adding up to a pair of choppers.  We'd stumbled into the muck of someone's cockamamie conspiracy, and someone was already on my case.  I called Gray before I called the local sheriff. 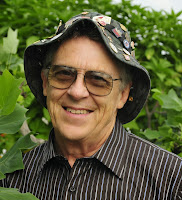 AUTHOR INFORMATION:
With postgraduate degrees and faculty appointments in several medical universities, Hawk MacKinney has taught graduate courses in both the United States and Jerusalem. In addition to professional articles and texts on chordate neuroembryology, Hawk has authored several works of fiction.

Hawk began writing mysteries for his school newspaper. His works of fiction, historical love stories, science fiction and mystery-thrillers are not genre-centered, but plot-character driven, and reflect his southwest upbringing in Arkansas, Texas and Oklahoma. Moccasin Trace, a historical novel nominated for the prestigious Michael Shaara Award for Excellence in Civil War Fiction and the Writers Notes Book Award, details the family bloodlines of his serial protagonist in the Craige Ingram Mystery Series… murder and mayhem with a touch of romance. Vault of Secrets, the first book in the Ingram series, was followed by Nymrod Resurrection, Blood and Gold, and The Lady of Corpsewood Manor. All have received national attention.  Hawk’s latest release in the Ingram series is due out this fall with another mystery-thriller work out in 2014. The Bleikovat Event, the first volume in The Cairns of Sainctuarie science fiction series, was released in 2012.

"Without question, Hawk is one of the most gifted and imaginative writers I have had the pleasure to represent. His reading fans have something special to look forward to in the Craige Ingram Mystery Series. Intrigue, murder, deception and conspiracy--these are the things that take Hawk's main character, Navy ex-SEAL/part-time private investigator Craige Ingram, from his South Carolina ancestral home of Moccasin Hollow to the dirty backrooms of the nation's capital and across Europe and the Middle East."

One randomly drawn commenter will win a $20 Amazon gift card.

The tour dates can be found here:  http://goddessfishpromotions.blogspot.com/2013/10/super-book-blast-nymrod-resurrection-by.html
Posted by Sandra Cox at 3:30 AM

Conspiracies are fun to unravel

One thing that I always think about with books is how to keep them from getting outdated too quickly. With your book, did you find any ways to get around technology or cultural references that could become tip-offs that the book is getting dated?

SANDRA's blog -
Thank you for your time hosting this bk blog tour of Nymrod Resurrection, one of the titles in my Craige Ingram mystery-thrillers...

…and as much fun to weave & plot to deceive…

You are most welcome, Goddess.

Hawk, Nice to have you. All the best with Nymrod.

Sounds like a great read!!
Thanks for the chance to win!
natasha_donohoo_8 at hotmail dot com