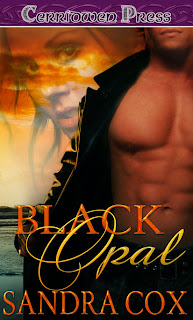 For an opportunity to win a PDF of Black Opal, just leave a comment. The drawing will be held Sunday September 12.

Have a safe and happy Labor Day.

The mingled scents of alcohol and heavy perfume hung like a low mist in the air.
Beads of perspiration glistened on Sabina’s forehead as the heat from the stage lights enveloped her. Eyes closed, she barely felt it. When Sabina sang she became one with the music. Every strum of the guitar, every bluesy note of the sax vibrated through her body and into her soul. She could feel her emotion reflected in the throbbing hush of the audience as the song erupted from her throat like a nightingale in flight.
She clasped the sweat-slicked microphone in her hands and drew air deep into her lungs. Just as she reached for the high note, a hard body careened against her and knocked her off the stool.
Sabina saw the horror on the faces of the audience as she arced through the air in slow motion before she and the man wrapped around her, slammed against the wooden floor. Moments later the large stage light landed with a loud crash, splintering the stool she’d been sitting on.
The audience jumped out of their seats, screaming. Their voices filled with fear and panic.
“Pull the curtain,” the manager yelled over the shrieks.
Clutched too tightly to move, she heard the short harsh gasps of her rescuer and felt his heart knocking against hers. And even though she’d never been in his arms, she knew who held her. Still in shock, she blurted out the first thing that came into her mind, “What are you doing here?”
“It appears I’m saving your life.” The voice was calm, whiskey-smooth but she’d felt the shudder that ran the length of his body before he spoke. “What the hell just happened?” His arms tightened around her.
Posted by Sandra Cox at 1:51 PM