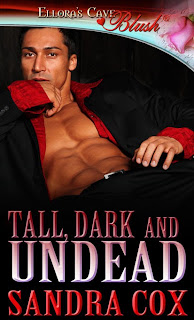 The fog rose off the dirty pavement and trailed through the night in thick sensuous wisps. Light from streetlamps turned the furled gray haze a grimy yellow. A dog howled, the lonely sound absorbed by the heavy mist.
The man roamed the near-empty streets. From habit, he pulled up his collar. He never felt the cold.
As he passed an alley, a scream rose before it ended on a muffled squawk. In a blur of motion, he entered the dark narrow space. He stood a hair’s breadth behind three thugs and their victim.  His fine-tuned senses took in everything at once.
From the blood on the face of one of the men, the woman wasn’t as delicate as she appeared. Tall and slender, blonde shoulder-length hair flew in mad disarray around a fine-boned face. But she’d already lost the fight. One man gripped her arm, her other hung limply at her side. Another male had her head yanked back by her hair with one hand, the other clamped across her mouth. Blood dripped between his fingers. The third ripped at her clothes.
She kicked out with both feet and caught the punk, tearing her clothes, squarely in the stomach.
“You bitch,” he grunted.
The man holding her hair took his hand away from her mouth, fisted his fingers, and slugged her in the jaw. Her eyes rolled back and her head hit the brick building behind her with a thud. She went limp.
The scent of her blood overrode everything else.  Thick warm liquid, the sweetest he’d ever smelled, drew him into an undertow of dark desire.
But even while he registered his response to her, he dealt with the men. He threw one down the alley to land yards away with a hard thump. Another he tossed on the roof of one of the two-story brick buildings that lined the alley. He tightened his hand on the third man's shoulder and bones crunched. The ruffian shrieked in pain. The woman fell from his dangling arm.
In a blur of movement, her rescuer scooped her up before she hit the ground. Her attacker pounded down the alley. His short sharp gasps of fright echoed in the narrow passageway along with the muffled thud of his shoes before he hit the streets and disappeared. The avenger could have easily caught the man, but the woman held his interest.
He drew her to him. He’d weaned himself from human blood over a hundred years ago, and now drank only prepackaged animal blood.
The temptation is too great. He felt his eyes glow with heat as they turned crimson. Venom built in his fangs as they pushed through the gums. He lowered his head. His fangs scraped her throat in the first sweet thrust of foreplay.
He watched her, his non-beating heart racing in his chest. His lips drew back, his fangs ready to sink into her sweet flesh.
Her eyes fluttered open.
~*~
Release Date: Nov 28, 2013
Can be preordered at: http://www.amazon.com/Tall-Dark-and-Undead-ebook/dp/B00DR146TU/ref=sr_1_3?s=books&ie=UTF8&qid=1376850685&sr=1-3&keywords=sandra+cox
Or
http://www.barnesandnoble.com/w/tall-dark-and-undead-sandra-cox/1116110460?ean=9781419945373&itm=1&usri=sandra+cox