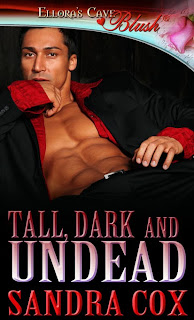 It's out.....
His eyes glowed bright as brimstone. The tips of fangs were visible even under his closed lips.
“Give me a moment,” he whispered in a hoarse voice.
As I stared, the glow subsided. From the wash of the street light his eyes shone a stormy gray. The tips of the fangs retracted. I walked to him, unafraid. “That’s twice now you’ve saved me.”
“You use up lives quicker than a cat.” His voice had returned to its normal melodious cadence. He watched me approach.
“Thank you, again.” I held out my hand. “I’m Suzanne James.”
The hand that swallowed mine felt cool and hard. “Adrian Caine.”  His touch drew me. His eyes compelled me. My heart beat quickened. My breath grew shallow. I took a step closer then closer yet, my only awareness: his magnetic gaze and the sweet peppermint of his breath on my upturned face. His eyes were stormy as thunderclouds on a dark night. “You conflict me.” He breathed that sweet scent on my face as his head lowered toward mine.
“Friend of yours?”
Cal’s voice startled me and broke the spell I had fallen under. I took a deep breath and a step back. “Yes. Cal Royce, Adrian Caine.”
The men sized each other up. From the expressions on their face, neither was much impressed with the other.
“You should do a better job protecting her, policeman.” Adrian spoke in a soft voice but it carried a sting like a whiplash.
Cal’s head jerked back. His hand tightened around my purse. I grabbed it before the contents spewed out from the force of his grip. “What the hell does that mean and who the hell are you? How did you know I was a detective?”
“Where were you when she was attacked just now?” Adrian countered.
Cal whipped around. “Is that true, Suzanne?”
“Yes.”  I felt a headache coming on. And my eye began to twitch.