Did everyone have a great Valentine's Day?  There were roses waiting on the table for me when I got up. Unfortunately, not in water. But so far, they're holding their own:) Later we went to a winery for lunch. It was a good Valentine's Day.

~*~
Blogsters, you're amazing. When I asked, What's your idea of 'First Thing In The Morning'  fourteen of you responded before nine a.m. and two a few minutes later.  I hadn't even had my first cup of coffee:) Pat yourselves on the back. Y'all got a serious jump on the day.

~*~
Now for some shameless self-promotion.


'Did you know flowers have their own language?
In a time when public displays of emotion were frowned on, Victorians used flowers to send coded messages.  This means of communication was called floriography.
The language of flowers has not only survived, but flourished. What if someone sends you a spider flower? Or a jonquil? What is this person trying to tell you?
Or maybe you should send a bouquet of nasturtiums and oak branches to your favorite military serviceman or woman to let them know how much you appreciate them.
The next time you send someone flowers, why not have some fun and send the flowers that symbolize your feelings?'

Flower Gardens and More   is on sale at Amazon for .99 cents. 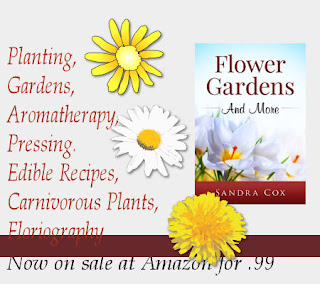