The Holidays Started With a Bang 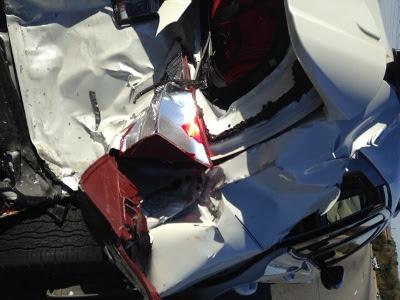 We had just picked up my sister and brother-in-law at the Charlotte airport and were heading into the mountains. We got as far as Hickory.  The HH stopped for a yellow light and by the time it turned red we were catapulted through the intersection and landed on the other side. It happened so fast we didn't even know what happened until the car stopped.   My sister's headrest was torn off.  Her suitcase was broken in half, windows were knocked out and the roof was split.  My brother-in-law went by ambulance to the hospital to get checked out and the rest of us under our own steam.
My head  knows we were very lucky, my psyche is trying to catch up.
On the upside, the EMTs, firemen and police were great.  Especially the firemen.  I don't know if you've ever been in a similar situation,  but after the paperwork is filled out, if you aren't taken away in an ambulance you're basically left at the curb. The police were good enough to tell us who to call for a rental and the firemen volunteered to take the luggage to the firehouse where we could pick it up later.  After quite a bit of time on the phone with the insurance company then signing up for the rental we went to ER to get checked out.  While there one of the firemen called and asked if we'd like our luggage dropped off.  We said sure.  A little while later, here comes the firetruck with our luggage in tow.  Firemen, they're the best.
Posted by Sandra Cox at 1:30 AM

Wow, how awful but I am pleased to hear you are ok. I hope the guilty is charged by police. Not a great start to the holiday.

It sounds like you'd just been through something very scary! I'm relieved that you got the luggage and that the police and firemen were helpful.

So sorry you had such a bad experience, but glad you are okay. Thanks God for helpful firemen. Take care of yourself! Hugs, Valerie

What a rough night. I hope your brother in law is OK and the rest of you are having a good reunion. Car accidents are surreal.

Thanks, Andrew. Hope your holidays were less exciting:)

Thanks, Cynthia. They sure were.

Thanks, EC. They were amazing.

That's a good word for them, Ann.

I've had one accident in my life, and it was on a lonely country road. There were three horses. I thought I had missed all three, when one cut directly in front of me. There were no firefighters, just the highway patrol. The person with me went to the hospital, while I was, as you say, kicked to the curb. So glad your experience was so much better. So glad everyone is going to be OK, too. What a horrible way to start your Christmas holiday. At least the outcome was great, thanks to the firefighters.

Oh no, that looks and sounds awful, I’m so glad you were all OK. We were involved in an accident a couple of years ago. Sadly, there was a fatality so the road was closed for several hours while an air ambulance flew in, and police cleared the carriageways. We were just a bit bumped and bruised, but our car was hit with several pieces of flying debris, and we were advised not to move it until the police checked it out. Some hours later, we were still standing at the side of the road, now shivering with cold and shock. As it began to get dark, we once again asked if we could move our car. It was then a policeman took pity on us. He ushered us to his patrol car, turned on the engine so the car would warm up, wrapped me in his coat and sent someone off to fetch cups of tea and biscuits. The police and ambulance crew do a wonderful job, and we were very grateful when they eventually said it was safe for us to move our car. I don’t know how you all felt but the true enormity of the event only really hit us the next day. It is terrible to witness the death of a young man and something I hope never to repeat. I'm very glad you are OK, but don't be surprised if you don't feel right for some time. Shock does funny things to a person.

The roof was split? Wow. What a blessing none of you were seriously injured. Sadly, I'm sure your car is totaled. Those firemen were just awesome though.

Yes, you've been very, very lucky, Sandra. I know what you're talking about. Thumbs up for those firemen.

Wowee! You were hit hard. Glad everyone in the car is okay now. I'm sorry you had to start off the new year with an accident.

Wow, that sucks indeed. But great no one was hurt. The firemen sure went above and beyond.

So sorry to hear this. What a way to start the holidays. Kudos to those firemen for bringing your luggage in style.

Oh Sandra, that's terrible. That's a lot of damage to the car -- I'm amazed and go grateful that no one was more seriously injured although as you know, the mental recovery will take a long time. Trust me, you'll be looking behind you every time you slow down to be sure the person behind you is slowing too. (At least, from my rear end experience which wasn't nearly as damaging as yours.) And you may feel some body effects after. Do you have a good massage therapist? I'd make sure you treat yourself well and visit -- often. Your physical structure has taken a terrible "wham" and your bones may hurt for some time.

I more or less know that territory -- or part of it. Rick's dad lives on Sugar Mountain near Banner Elk and when we come in every summer we are usually coming from Myrtle and end up going through Hickory. Beautiful country but very hilly. I sure hope the person who hit you is fully charged. Was texting/phone involved? That seems to be a big cause around here.

Please take good care of yourself and be very gentle with you. SO grateful to the firemen...

:-O Scary, indeed. So grateful no one was seriously hurt. Your brother-in-law is ok? Police and firemen are the best. And on the bright side, after a rough start, you're year can only go up.

Out on the prairie said...

Yikes, hoping all is well

So sorry Sandra. I can't think of anything more scary. So glad all of you were able to walk away, but sometimes things come later so keep an eye out for them. Terrible way to start the season, but all I guess you can do is look for the silver lining. Stay safe.

That sounds nasty, Elizabeth. Sorry you had to deal with that.
Being 'kicked to the curb' is unnerving. No transportation. No way home....

I feel so bad for you and I am certain you are feeling the effects now of this crash as well as the rest of your family. I find that it takes a week before all the pains start coming. I'm glad you were not all seriously injured but this was horrible. I hope you will get enough money to get another car and bless the firemen.

Oh my gosh, Barbara. How horrible. So sorry.
It does tend to stay with you, doesn't it?
Hugs

Oh yeah. The adjuster said it looked like we'd been hit by a freight train. Another couple of inches and I'm afraid we would have been looking at fatalities. We liked our vehicle before but we now swear by RAVs.

Yes, we were, Blue. Another inch or two and it would have been a different story.
And the firemen were awesome. I don't think I'll ever forget seeing the firetruck coming down the street and stopping by our rental:)

Thanks, Diane. Appreciate that. It certainly wasn't what I envisioned.

Oh noooo. So sorry to hear about this accident. Did the driver slide on ice into your rear end or was he texting or distracted by something else? Did he/she get hurt? Glad you had a tough SUV around you! I had no idea they leave you at the curb, but kudos to the firemen for caring.
JQ Rose

So so so glad you weren't hurt more. Prayers for all

It did suck and the firemen were great:)

I echo your sentiments, Colette. Kudos to the firemen:)

so glad things worked out so scary!

Thank you, dear Jeanie.
Sorry to hear you got rear ended. I completely agree about the massage therapist. I've got a honey that I will be seeing this week.
We aren't too far from Hickory. Maybe next year we could do lunch when you come through.
I wondered about texting too. Though, it's hard to get too upset with the other driver, she was pregnant. And she's okay.

I'm counting on that being the case, CJ:)

Sandra....I've got prayers out for everyone; I know what you mean; psyche.....car was totaled, no one was hurt, the ***@^()! left the scene, insurance caught up with him six months later, car was replaced, but for weeks... I took a different route to work.... in my instance though it was like slo mo....I am sorry and I hope your BIL is doing very well ~~~ N yea, firemen DO rock, my dad is one ♥♥♥♥♥

I am glad all are well,material things can be replaced, but not lives.
You were indeed 🍀

Thank you, Donna. I appreciate it.

Thanks so much, Birgit.

Oh my goodness you all are so very lucky, but you would know that.
Hope you are alright now as in mind.

No ice. I do wonder about the texting.
Thanks, JQ.

Oh, yikes! So sorry you had to experience something so traumatic. Glad to hear you guys were ultimately okay. Can't imagine how scary that must've been to live through!

Thank you, Peggy. Appreciate that.

Thank you. Yes, it does tend to stay with you. I sure understand about taking a different route to work. Glad they caught up with him.
That is great that your father is a fireman!

Thanks, Adam. Appreciate it.

Sandra!!!!!!! I am so sorry!!! I am happy everyone came out of this ok!!! I read your comment up above. You drive a Rav? I drive one too and I love it! Please take care of yourself and everyone else who was in the Rav! You will have things that come up later! I am so happy you were taken care of well with the firemen! Do you know why you were hit???? So bad!! Roof was split??
You got this out of the way, now the rest of the year will be amazing!!! Big Hugs!!!