We are in for a treat today. Our blogger bud and awesome writer C. Lee McKenzie has a new release to share with us, Medieval Magic.


Thanks so much for giving me some space on your blog today. I really appreciate it. Book #3 in The Adventures of Pete and Weasel arrives May 15. This one was as much fun to write as the others, and I loved getting into the history during the time of Richard II! I even re-read Ivanhoe. That was interesting. One of the dogs in that book was named Bragge, so as a homage to Sir Walter Scott, I named one of the dogs in Some Very Messy Medieval Magic, Bragge. 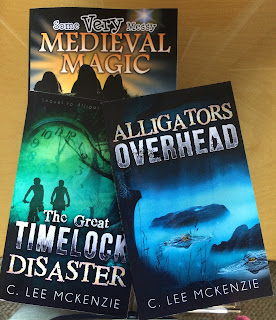 Instead of writing a tagline to explain what this series is about, here's the trailer that sums of the three books very quickly.


Here's how this latest adventure begins.


By the fourth week of eighth grade, everybody in class, including know-it-all, Curtis Lamont,  decided that having Dr. Dread Wraith as a teacher until June was going to be worse than a bowl of turnips for dessert.
The pop quizzes weren’t even a surprise anymore because he gave one almost every day. And all any kid had to do was squirm when Wraith was giving one of his lectures on the theory of general relativity, which nobody—even Weasel—had ever heard of, and he’d slap them with detention.
They cringed every time they heard his name. It was a cringe-able name after all. Pete wanted to tell the kids the reason Dr. Dread Wraith called himself that, but he didn’t want to bring up how their sub was really a bigwig in the Cross-Temporal Consortium of Witches and Wizards. Or that he had to go toe to toe with bad dudes like Genghis Khan. Like Wraith told him, without his bone-chilling name, he didn’t have the clout he needed.
If Pete did explain all of that, then that would lead to having to explain how Wraith, who wasn’t really a bad guy, just a menace of a teacher, had followed Pete and Weasel back from their last time trip.  And that. . .well, that was just too much for any eighth grader to swallow.
All my books are available online.
Some Very Messy Medieval Magic is available at these locations.
AMAZON . B&N . KOBO  . SMASHWORDS . YABC
Print ISBN 9781939844460 / EBook ISBN 9781939844477
Order through Ingram, Follett, or from the publisher
EBook available in all formats
My publisher has created a library request letter that I'm including. If people want to check out the book, rather than buy a copy, this is one way to make that possible. 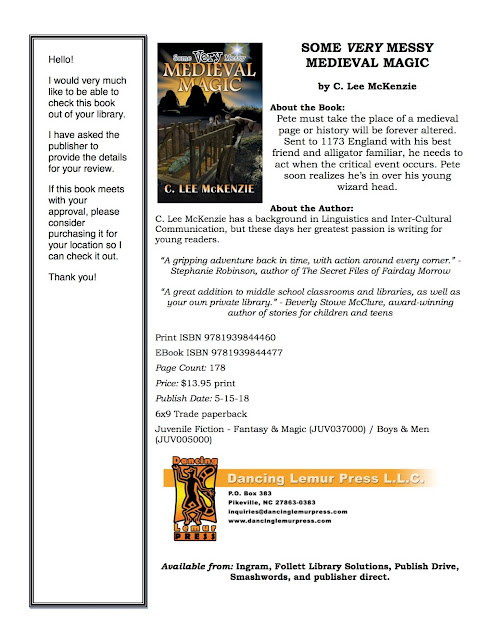 I hope you enjoy this next adventure, and if you do, please leave a review. That's the only way any author knows what you think about their work. I really appreciate it when someone takes the time to write a review for me.