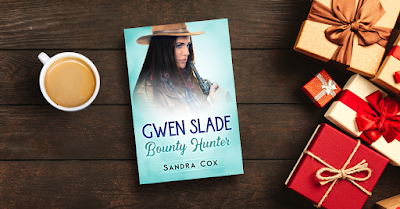 The first and foremost necessity, for anyone who roamed the Old West, was a horse. For the most part they rode quarter horses, known for their sturdiness and speed. Like the cowboy they had to be tough and survive on whatever was available, since most cowboys didn’t carry grain for their mounts. Many cowboys also preferred dark horses to piebalds and other horses favored by Native Americans, considering them better workers. If something happened to a cowboy’s horse when he wasn't near a town, his chances of survival were thin. Hence the reason, horse thieves were hung. 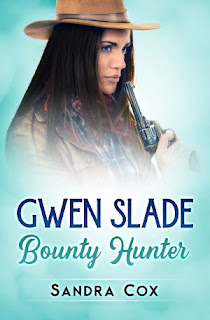 After Jordie saves her family, she finds she can’t in good conscience turn him in, even if he is worth a thousand dollars dead or alive. Instead, she sets her sights on the meanest, most-wanted gang in Kansas. Gwen always works alone until she goes after the gang then finds herself partnering with an unlikely source.

This time around, not only her life, but her heart is on the line.

Legs splayed, Gwen Slade aimed her short-barreled rifle. Sunlight glinted on the barrel and gave the Kansas sandstone canyon an illusion of warmth. A stiff breeze loosened the pigtail hanging down her back and whipped stray strands of hair around her face. She ignored the bite of the wind, focused on the hombre in front of her.

“Now honey,” Rotten Don Tucker, wanted for stagecoach robbing, moved toward her. “You better give me that thing before it goes off.”

She spun her rifle and shot his hat right off his head. “The next one will be a few inches lower.”

He stopped, a scowl on his ugly, pockmarked face then sneered. “You’re that woman bounty hunter.”

“No woman’s taking me in.” His hand reached for his gun.

Swift as lightning she lowered the barrel and pulled the trigger.

He dropped his hand to his thigh as he stumbled, his leg crumpling, his expression incredulous. “You shot me.”

She shook her head. “You’re lucky I didn’t kill you. The wanted poster says dead or alive. Now throw me your gun with your left hand or this time I will put a bullet in your head.”

The gun landed with a thump at her feet.

“Turn around and sit with your back to me.”

He dropped to the ground, groaning, leaning on his good side, more concerned about his leg than her. Never taking her eyes off him, she grabbed the rope from her saddle horn, holstered her rifle and trussed him like a turkey.

She scowled, tapping her toe, frustration arrowing through her system. Now she had to haul his sorry carcass across his horse. She took a deep inhale, tamped down the annoyance, and dragged him to his feet. All in a day’s work.

And thanks to Jacqui Murray and Chrys Fey and Natalie Aguirre AND J. Q. Rose for helping me get the word out. Appreciate ya. 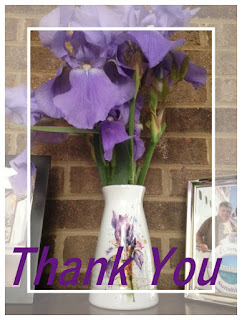