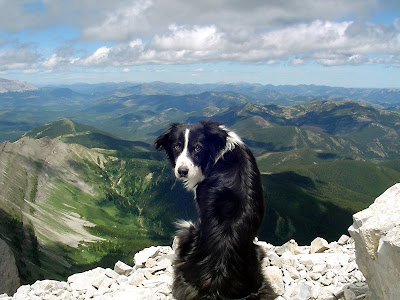 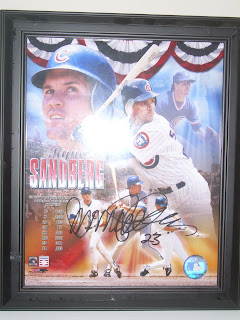 Any Cub fans out there? Remember Ryne Sandberg? He was my son's hero when my son was growing up. Ryno is now managing the Tennessee Smokies. 'The boy' went to the game the other night and got to meet Ryan and get his autograph.
Ryne Sandberg was one of the best second basemen of all time.
He was drafted by the Phillies in 1978 and traded to the Cubs in 1982
In 1984, he led the Cubs to a divisional title and was named MVP.
He retired in 1994, then came out of retirement in 1996-1997.
Sandberg was inducted into the Hall of Fame in 2005.

Speculation is that Sandberg is being groomed for the position of Cubs major league manager when the current manager retires.
Operation Rescue

We live in a disposable society. Sadly, most of us are only too aware of 'people' that decide they no longer want an animal and leave it out without food and water to die a slow and excruciating death so they don't have to deal with killing it or keeping it. My son's fiancee, came across just such a situation. An eight week old puppy had been placed in a box in the driveway without food or water and left to die. She called the local animal rescues and had no success. At this point her options were take it to the shelter for a quick humane end or leave it to die slowly. 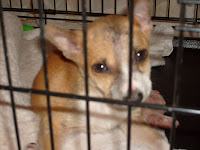 She opted for the shelter where she found out they were out of room and it would be put down immediately. She begged for more time and they gave her till four o'clock.
She made some phone calls including to me. I started making calls but felt it was hopeless. This is puppy and kitten season and the rescues are inundated. Someone I called, made more calls and a miracle happened. A group agreed to take him. My son went to the shelter and got him and then took him to the vet.
Now its just a matter of making arrangements to hook up with the rescue group that agreed to take him. One puppy saved.
Posted by Sandra Cox at 9:17 PM