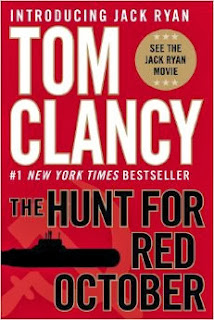 Tom Clancy, a superstar in the book world, died last week at age sixty-six. He referred to his mega success as just dumb luck. It's an amazingly humble statement for someone who fathered a genre and was considered one of the best author's of his time.
His passion for military history began early. Instead of reading children's books, he went straight to books on engineering and the military.
Tom Clancy started out as an insurance salesman, who wrote on the side. When the Naval Institute Press purchased The Hunt For Red October for $5,000.00 his meteoric rise in the publishing world began. It was nudged along by Ronald Reagan who loved the book and
referred to it as 'my kind of yarn'. He was so techno savvy that even the military wondered where he got his information.
He ended up with seventeen best sellers and over 100 million book copies in print.
Mr. Clancy was part owner of the Baltimore Orioles.