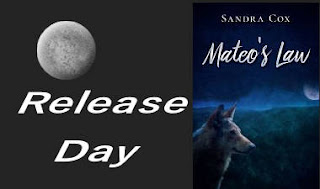 He’s the sheriff of a sparsely populated county in Montana. His blood brother and childhood best friend is Chief of Police on the Blackfoot Reservation, but they no longer speak. His deputy is a Southern transplant with the body of a high-priced call girl, a voice of honey and a mouth of a trucker. And if that’s not enough, he’s got a secret that would stun those that know him best. Other than that, it’s business as usual for Sheriff Mateo Grey.

A chill March wind lifted Chief Deputy Blair Delaney’s ponytail and nipped her skin as she stepped out of the patrol car, snapping a twig beneath a sturdy boot. With a flick of her thumbs, she turned up her collar and burrowed deeper into her worn, brown bomber jacket.

The setting sun hovered on the horizon and outlined a dark-barked, bare-leaved oak that arced over the porch of Sheriff Mateo Grey’s cabin.

The temperature dropped. A wolf howled.

She spun on her heel. The large gray predator stood at the edge of the property, watching her. As seconds ticked, he held her gaze but came no closer. Finally, as if bored by the whole situation, he turned his head and loped behind the cabin to disappear into the trees.

Whoosh. Blair didn’t realize she’d been holding her breath until she expelled it. She’d seen the wolf before. That one and an older version that melted into the forest whenever she appeared. Apparently, they considered Mateo’s property part of their territory. And speaking of which, where the hell was he?

She took an impatient step forward then faltered as the hair on the back of her neck rose. The sense of a malevolent presence increased with the disappearance of the wolf. Her hand on the pistol at her waist, she whipped around and stared into the trees that surrounded the house. She appreciated Mateo’s desire for privacy but did it have to be in the middle of bum fuck nowhere?

Blair considered herself a pragmatist and seldom gave way to flights of fancy. Still a ripple of unease stole over her like a thick, tangible mist smothering her senses. She drew her gun, forcing her hand not to tremble.

She whirled. The sheriff stood on the porch shirtless and shoeless, worn jeans riding low on lean hips. Her heart gave a hard thump and her blood pooled at her feet. Dammit to hell, why couldn’t she work for someone who was overweight, balding and ate too many donuts? Though, on the plus side, he did have a way of heating her up and keeping the chill at bay.

He took one swift glance at the gun and was off the porch and at her side in four long-legged strides. Even in the biting wind she could feel heat pouring off him.

He ignored the question and cut to the heart of the matter. “What’s wrong? Why is your gun drawn?”

Feeling like an idiot, she cleared her throat. With his appearance the malevolent sensation dissipated like smoke. “I thought someone was watching.” She holstered her gun.

He took a step past her, alert, dangerous.

Sandra is a vegetarian, animal lover and avid gardener. She lives with her husband, their dog and cats in sunny North Carolina.

Her stories consist of all things western…and more. She is a category bestselling Amazon author, Eppie finalist and Golden Ankh Award winner.

You can find her at: https://www.sandracox.blogspot.com .

If you were a shapeshifter, what animal would you be? Where would you live?
Posted by Sandra Cox at 12:30 AM