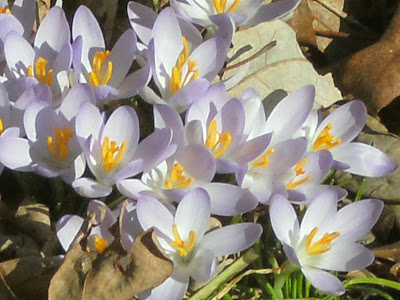 I'm so excited. After all the cold weather and snow we've had lately, look what I discovered in the backyard.

VI contest will be running from February 15th through March 13th.To enter the random drawing just leave a comment at downtownya.blogspot.com. It can be as simple as hello.And... send an email to sandracox1@gmail.com. In the header write VI Contest.The winner will receive an autographed copy of Vampire Island and a pair of vampire red and hissss silver earrings. Only one entry per person please.
~*~
Vampires
They frighten and fascinate. For years vampires were the stereotypical black caped, coffin variety that could turn into a bat and fly away at a moments notice, outlined against the moon. These vamps had fangs that sucked their victims’ blood and secreted venom. They only came out at night, because they fried in the sunlight. Humans were nothing but a food source. And even though we feared and loathed them, they still held us enthrall.

Today that has changed. Vampires come in all varieties. Not only are there the badass villain-vamps, but there are now hero vamps that we love and lust for. Vamps that protect frail

humans. We have Angel from the Buffy series, Nora Robert's Ciane,and Stephanie Meyer's phenom Edward to name a few. The new vamps can be out during the day as long as it’s overcast. And Edward doesn't have the classic fangs. He has regular teeth though they are still laced with venom.
Vampire Island has classic villain vampires and the pranic variety. The pranics can be good or bad and instead of sucking blood, suck energy from their victims. The good pranics know when to stop before they do serious damage. Like their counterparts, pranics operate best at night. That is when their energy level is at its highest and their vision at its best. Sunlight burns their skin.
Given the wide scope of vampires, who are some of your favorites? Which vampire do you loathe? Which do you love?
Posted by Sandra Cox at 10:52 AM