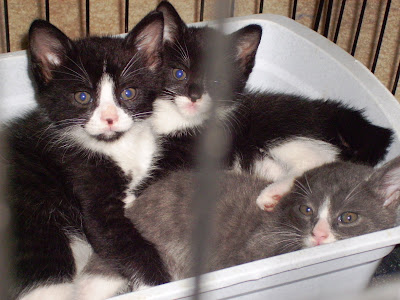 Thursday was critter day. I had agreed to foster three kittens--see above. Pretty cute aren't they. So I stopped by the vet to pick them up then got them settled in. These guys brought the critter quota up to a dog and eight cats at the house. Plenty of critters, right? Later that evening, I went for a walk with the hh and the dog. We were walking down the lane when what did we see coming toward us on the other side of the road....Take a guess.
1. A car
2. A truck
3. A turtle
4. A deer
5. A raccoon
6. A parakeet.
I bet you cheated and looked at the pic. Yup, there was a little blue parakeet meandering down the road. He hopped right up on my shoe and began to nibble at the laces. We put him in a box and made the rounds of the neighborhood but no one claimed him. So yes, we now have a dog, eight cats and a parakeet in residence. The poor little guy, who I call Fred, probably thinks he died and went to birdie hell with all the cats around. I'm hoping to find him a good home soon.
Years ago during the depression, if a farmer was generous and gave them food, hobos would leave a mark at the end of the a farmer's lane. This was done to alert other hobos that this was a good place to stop, that they would be fed. I think the animals have discreetly placed a paw print somewhere on the property:) 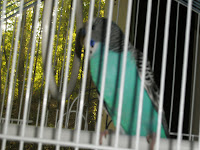