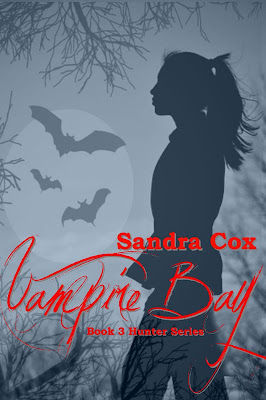 My name is Zoe Tempest. Don’t let this blonde-haired, blue-eyed Barbie Doll exterior fool you. I’m a vampire hunter. I have been ever since Dere, the king of bad-ass vamps murdered my parents and I went to live with my uncle, Julian Kilmer. Maybe you’ve heard of him. He’s a renowned paranormal metaphysical author. But in the world of the undead, he’s known and feared as a vampire slayer. Besides slaughtering my parents, Dere destroyed everyone that Uncle Julian ever loved. In doing so, Dere forged a bond between us thicker than the blood that binds us. After I moved in with Uncle Julian and learned to fight, I got my revenge and turned Dere’s butt to dust. At least, I think I did. Since Uncle Julian and I came to Vampire Bay on a vamp hunting expedition I’ve begun to wonder…
Available at Amazon.com
and
Smashwords.com

CONTEST IN AUGUST
Posted by Sandra Cox at 5:37 PM

Oh yeah! Gotta get this one!