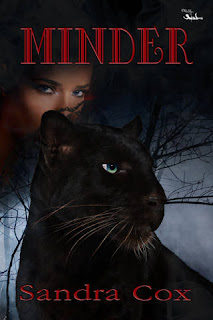 To celebrate the release of Minder, I'll be running a month long contest. The winner  gets:

A set of butterfly pins--on right
A Starbucks gift certificate
A book dedication
and
A download of Minder
To enter: Just leave a coment mentioning Minder and  include your email addie.

Among the northern tribes there is a legend passed down from generation to generation about shape-shifting Minders—guardians of the innocents—and how they came to be.
It is said that nowadays only a handful of Minders exist, hunted to near extinction by a fearsome beast. Of the remaining Minders, only one wears a garnet-studded collar, the symbol of protection and royalty.
Even when my aunt told me the story, and handed me an ancient garnet-studded band, I had no idea the tale applied to me.
After all, it’s only a legend…

“Try on the necklace.”
“There’s no clasp.” I held it between my fingers and studied it.
“Just slip it over your head.”
“I don’t think it will fit.”
“Try.”
The necklace widened easily as I slipped it over my hair then narrowed to embrace my throat. I straightened and lifted my chin.
I might be outdoorsy, and though I don’t obsess over them, I enjoy pretty things especially clothes and jewelry.
But this was different. This piece of jewelry was an extension of me. I felt alive, regal, protected. I frowned. Protected? What an odd thought.
“It’s beautiful. It sets off your long swan-like neck to perfection. It belongs on you.” My aunt studied me her eyes alight with what looked like affirmation.
“Yes.” I touched it. “It feels like it was made for me.”
I felt the pull of an intent gaze and knew who would be staring. I turned my head. Our gazes collided. I could see his golden eyes dilate to black, his nostrils flare and strangest of all I could smell his heat.
His gaze locked with mine, he stood abruptly. The woman who sat beside him grabbed his arm and pulled him down. She glared at me.
Acutely aware of him, I broke eye contact and turned back to my aunt. “You said it was a gift from my mother?”
“She wore it. Do you remember?” Aunt leaned forward, her elbows on the table, her chin in her hands, her eyes intent.
I frowned and tried to recall. A forgotten memory surfaced. A young woman who looked like me turning in a circle laughing, butterflies fluttering around her, the necklace at her throat. I felt a thrill. Our features were nearly identical, her hair the same color, texture and sheen only longer.
“Yes, I do.” I smiled. The memory a gift I would cherish and hug close to my heart.