BB: The Freedman and the Pharaoh's Staff 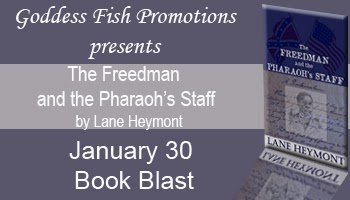 BLURB:
Jeb, a former slave, rescues his brother-in-law Crispus from the Ku Klux Klan, only to be drawn into a world of Creole Voodoo, racism, time travel, and redemption.

Verdiss, the leader of the Ku Klux Klan has gained possession of the Pharaoh's Staff, a magical artifact from ancient Egypt and concocted a diabolical plan far more insidious than himself.

In the end, Jeb and Crispus must stop an entire people from eradication and each find redemption for their own past sins.
EXCERPT:

Small rib bones clattered on the wooden table, where several black and red candles burned, their flames dancing like a company of elegant danseuses. There was a sense of power in the air. The old conjure-woman felt its prick at the back of her throat as she studied the animal bones. La’Rita was a Haitian woman with a cape of dreadlocks. She would have been beautiful were it not for the boils covering her face—and that her eyes were devoid of any color. La’Rita leaned over the table, shifting her weight in the chair. Shelves and desks filled with jars of grotesque, rotten items surrounded her. Foul-smelling roots and herbs filled some. Rancid liquids filled others to preserve the dead animals they held. Leather-bound books occupied some of the shelves, many etched with strange, archaic symbols.

“Ah, yes,” La’Rita whispered as she looked deeper into the bones. Images danced and twirled across the table, outlined by the dim candlelight. Her empty eyes poured over the phantasms, one by one. Stiff metal birds soared through the open sky, dropping massive pipes. La’Rita shuddered, feeling a sinister force was responsible for the contraptions. The form of an ancient staff passed through her vision. It held within it a great power. Metal boxes on wheels and metallic belts rolled across broken and burning landscapes, fire bursting from their elongated snouts.

Her body shook, spasms rushing up from her feet.

Apparitions whirled around La’Rita, changing, appearing, and dissipating into air. The tremors grew. La’Rita’s entire body shook. She struggled to stay in her chair.

A grizzled man wisped by her eyes. Then the fit ceased. He’d gone by fast enough that La’Rita hadn’t a chance to notice his features. Only his dark skin. She squinted her eyes, spotting the faintest aura in the air. A man with a fine mustache. La’Rita’s head throbbed as if a miner were taking a pick to it. The room shook. Was it her moving or the room?

Her gaze met the phantasmal man’s wretched eyes. The ghostly image made La’Rita sick to her stomach. Utter evil oozed out of this simple-looking man. Too much to bear. Her eyes rolled back. Darkness descended.
AUTHOR Bio and Links:
Lane earned a BA in Liberal Arts with a focus on literature and history. He also holds a double minor in psychology and business. He is a literary assistant with The Seymour Agency, and also has several short stories. He is a member of the Horror Writers Association, Historical Novel Society, and International Thriller Writers.