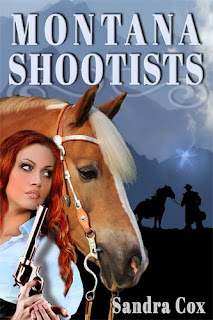 New Release
Montana Shootists A Time Travel Romance
Blurb:
Present Day: Abby loved David all her life. Growing up they were inseparable. After high school, when he joined the Marines she did too.
Then disaster struck.
After leaving the Marines, she returns to the family ranch in Montana hoping to heal her shattered heart.
On a ride into the foothills she sees something glowing in the side of the mountain. When she goes to investigate she discovers a fist-sized sapphire that turns her already fragile world upside down.

1882: Jake Barrow is a part-time gambler, full-time hired gun. His decisions are based on hunches and the turn of a card.  He’s in the foothills when a young woman comes tumbling down the mountain. Unsure whether Lady Luck has dealt him a good hand or a bad, he takes one look at the beauty at his feet and doesn’t need to shuffle the deck to know she’s his destiny.

Excerpt:
The cloying scent of roses hung heavy in stifling air.
An occasional leaf rustled in the stop-and-start breeze, and a solitary bee droned in the background. Murmuring and shifting came from the onlookers on white folding chairs. Tissues dabbed at damp brows on an unusually scorching May afternoon.
All became quiet as a commanding figure strode onto the stage. Clapping broke out that quieted when he raised his hand. He began to speak. “Good…” The microphone shrieked.
He tapped it and tried again. “Sorry ladies and gentlemen.” He cleared his throat and his sonorous voice boomed out a lengthy welcome before his features settled into solemn lines befitting the occasion. “PFC Jennings, for action above and beyond the call of duty, for saving twenty-three lives—both civilian and service—I award you the Navy and Marine Corp Medal.” With great ceremony, the President pinned the octagonal bronze medal on the Marine’s chest.
“Thank you, Mr. President.” Not by so much as a twitch did the Marine acknowledge the tension building between tight shoulder blades or the stabbing pain between the eyes.
Once again, applause broke out from the seated attendees on the verdant lawn.
The President turned off the microphone.  “I’m sorry we couldn’t honor your fallen, fellow Marine today but his mother is ill.  We’ll have the presentation next month. You’ll attend of course.”
“Of course, Mr. President.”
“I’ve been told he was an exemplary man and Marine.”
The Marine’s heart tightened.  “None better.”
“What are your plans now?”
“My family has a ranch in Montana, sir. I’m going home.”
“Two tours in Iraq, then saving nearly two dozen people when a fire broke out in a nightclub when you were finally stateside, I’d say you earned it.”
I didn’t save the one that counted.
“Good luck to you.”
“Thank you, Mr.  President.”
With a clipped nod, a salute and sharp, tight-cornered turn, the Marine marched off the stage, this time the applause thunderous.
Once through the crowd of well-wishers, the Marine reached a beat-up red convertible, hopped in and pulled out into traffic. At the first stoplight, Abigail Jennings threw her hat in the back seat, pulled the pins from her long russet hair and shook it free. Her bags packed, and in the trunk, she headed west.
$2.99 @ Amazon
$0.00     Kindle Unlimited

Sounds good, I will get it on my Kindle. Hugs, Valerie

Now I wish I owned a Kindle, because this sounds absolutely fabulous.

Yet ANOTHER new release? You are a writing machine. And a shameful temptress.

Look at you go. Putting to shame our show. You'll get 600,000 sales before us now lol Congrats!

Thanks for sharing this :)

All the best Jan

Thanks, Val. I appreciate the support:)

Thanks, Elizabeth. I'm glad you like the sound of it;)

Sounds good. One of these days I will get a Kindle.

How do you do it all including writing books and still have time for us, your blogging friends??? You are amazing and this book sounds very intriguing!

Wow girl, congrats!! So happy and proud of you! Sounds great, time travel, cool! Sandra, what is the Golden Ankh award? Big Hugs!

Thanks, Stacy:)
Golden Ankh was given out by a former publisher.
Hugs received and returned.

Heh. It's going to be awhile before the next one.

This sounds like a really cool story, Super Sandra! You are good at so many things, which is really neat. I visited Montana once and discovered Fuddruckers - a hamburger spot which I fell in love with.(lol) Congrats on the new novel and HUGE Hugs...RO

Thanks, Ro. I truly appreciate that.
I bet you did like Fuddruckers. We used to go to Fuddruckers in Hickory all the time. My HH, son and bro LOVED it.

Good to hear, CJ. Thank you.

:)
I enjoy mine. I'll read paper for awhile then flip to the Kindle, then paper, then Kindle:)

Thank you for the kind words, Jan. Much appreciated.
Hugs received and returned.

This looks fun! I need a good summer read before school starts back up at the end of August. Looks perfect! :)

Congrats Sandra - You have so many books, I am not sure what one I should read?

Congrats to you for another book. I don’t have Kindle but love to read it. I hope to.

Cool. Hey Sandra, do you have a favourite novel you have written? I know it's hard, because they are all your babies, but I was just wondering?

Hey Marcie! How are you?
Do you teach?

Three cheers, Sandra! I have got to get a kindle someday!