Year of the Bird...Or Picking Up Chicks 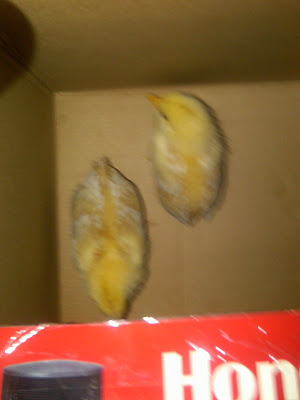 Year of the Bird.
Regardless of what the calendar says, its gotta be.
Remember the adventures of Fred the Parakeet? Well my son called a little while ago to tell me there were two little baby chickens hopping around his apartment complex near the road and a storm was coming.
"Kittens?" I said intelligently.
"Chickens," he responded.
"Chickens with a C?"
"Chickens," he says again.
So after I'm in the loop on what type of critter needs rescued, he hangs up and gets a box to put them in. But instead of hopping toward him as Fred did me, they took one look at my 6'4" offspring and took off in the opposite direction just as fast as their scrawny little legs would carry them. He managed to get them rounded up, then called the local rescue who referred him to the animal wild life rehabilitator. The woman who answered the phone said, "I've got chickens. I'll take them." Whew.
Parkakeets. Chickens. What's next? Turkeys? Buzzards? I'm a fiction writer but even I couldn't makeup this stuff.
Do you have any crazy fowl stories? I'd love to hear them.
Posted by Sandra Cox at 6:10 PM

Email ThisBlogThis!Share to TwitterShare to FacebookShare to Pinterest
Labels: Year of the Bird Chickens baby animals