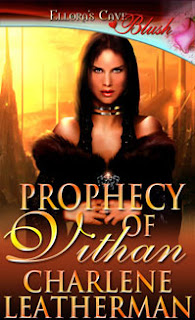 I just purchased this book and I’m am looking forward to reading it. Looks like a good one doesn’t it? If you're interested in buying and reading it, I've included the link below.

Morgan had the life she had always dreamed of. Although still a brothel slave, the king and queen treated her like a free woman and the prince she was training was like a son to her. Then everything goes to hell. Morgan is forced into a marriage with a man she cannot respect or admire. Her prince is missing and the king and queen are killed. Morgan is blamed for the murder. Morgan's primary concern is to find Prince Khai.

The only thing slowing Morgan down is the prophecy about her saving the galaxy, remaining a virgin and that damn electric attraction she feels every time Len touches her.

Len had his orders. The ones everyone knew about and the other ones. Marry his soul mate and consummate the marriage, and determine if his new wife was the original Morgan Taj Zephyrain. The first he looked forward to. The second he preferred to ignore. Obviously Morgan Taj Zephyrain is the criminal Len is seeking. It is Len's job to bring the murderer to justice.

‘Prophecy of Vithan is the most outstanding book of it's genre I have ever read.’ ~*~Helen Woodall, Editor Ellora’s Cave

My sincere sympathy to Charlene - and yes, I have read Charlene's work and I know she is a damn fine auhtor

I read this book when it first was released. It's a wonderful book! On my keeper shelf!