Remember David Brown? He was here earlier in the year. We'll he's joining us again today to tell us abo

ut Elencheran Characters. Just a small aside, not only has David built an intriguing fantasy world but he keeps rescue cats. Kudos, David, and welcome.


What Makes an Elencheran Character?

The world of Elenchera has been more than ten years in the making and there are many weird and wonderful characters that live there. This is a world where survival of the fittest is very much at the forefront of history. Many lands strive for peace, but there are plenty more that ensure this never happens. Monarchs and other rulers are seldom content with the lands they rule. They’re always thinking much bigger. They have a limited amount of time in the world and their desires are to write their names into the pages of history rather than be forgotten.

ld’s history. Elenchera and its multitude of historical events are not there to dominate the pages and leave the reader rolling their eyes with a history lesson. Anything about Elenchera is in the background, it is the characters that are the most prominent on each page.

In my debut novel, Fezariu’s Epiphany, our principal character is Fezariu who suffers many upheavals in his childhood including abandonment by his mother and the murder of his stepfather. It is all too much for Fezariu to take and he flees from his past and finds a haven with the Merelax Mercenaries – one of Elenchera’s most prestigious fighting forces. It is the fresh start Fezariu needs and he excels as a mercenary, always perched on the fine line between life and death with no need for emotional constraints or thoughts of his past. As withdrawn and seemingly cold as Fezariu longs to be he makes friends in the mercenaries that leave their mark on him and that past he so desperately wants to forget will simply not go away. Fezariu is an ordinary individual who has an amazing story to share and this is how all Elenchera novels will be.

I’m currently working on my second novel, A World Apart, which focuses on three friends – Demetrius, Eleyna and Halcyon – who grow up together in the town of Dove’s Meadow. In their teens they find themselves in the midst of a love triangle which is only resolved when one of them leaves town. With new paths set the trio of friends seem destined to forever go their separate ways but they are reunited by unfortunate circumstances and the extent to which they have changed is too much to bear. Sadly for the three friends walking away is not an option and they are forced to face each other and their pasts.

Characters in Elenchera are not perfect. All of them have weaknesses and flaws that some can overcome but others have them as permanent obstacles in their lives. Survival is obtained by whatever means necessary. While the likes of elves, dwarves and dragons thrive in the early centuries of Elenchera due to their strength and longevity, such reigns cannot lost and is the same of all races in Elenchera. Some are wiped from the face of the earth, others rise and fall with the passing of time but Elenchera always remains. Each novel will give you a taste of the ever changing history. Elenchera is an uncompromising world but happiness is possible and all characters are out to achieve it whatever way they can.

David M. Brown was born in Barnsley in 1982 and first conceived the idea of Elenchera in college. His love of history and English led him to read t 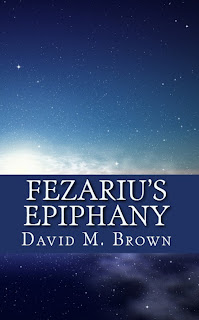 hese subjects at Huddersfield University. David is inspired by medieval history, Norse mythology and Japanese role-playing video games and anime films. He lives in Huddersfield with his wife Donna and their six rescue cats.

The World According to Dave: http://blog.elenchera.com/

Email ThisBlogThis!Share to TwitterShare to FacebookShare to Pinterest
Labels: Name Before The Masses David Brown fantasy