Louisa And The Crystal Gazer

Anna will be giving away a gift basket to one randomly drawn commenter during the tour .


With us today is Anna Maclean. I asked Anna, how do you begin a murder investigation when dealing with a spiritualist?

What a great question, and thanks so much for inviting me to visit.

Well, you don’t ask the ouija board! Seriously, dealing with a spiritualist was an interesting experience and a little more difficult than dealing with the other murders in which amateur sleuth Louisa May Alcott gets involved. Forensics and the other elements of scientific investigation weren’t available yet in mid-nineteenth century Boston. They didn’t even yet know about the use of fingerprints. Guilt was established largely on circumstantial evidence, flimsy or not, and character assessment.

The challenge for Louisa in Louisa and the Crystal Gazer is to discover who the spiritualist really was, so that she could then discover what the motives for her murder. And crystal gazers and other characters tended to have a great many secrets. Getting to the truth of their lives and identities would have been particularly challenging. The character of the murdered spiritualist, Mrs. Agatha D. Percy, is based on my readings of many journals, diaries and biographies of actual nineteenth spiritualists. They tended to be women of low or middle class who might have experience with some of the darker, even seamier side of life. They were often down on their luck, either single or perhaps abandoned by their husbands, and needed a way to make money. They wouldn’t have minded playing a few tricks on their paying customers, and that in itself could be a motive for murder!

Louisa solves the mystery, thanks largely to what I think was her greatest inspiration: the practical intelligence and humanity of her mother, Abba Alcott. Abba, in the novels and in real life, was a woman who knew a thing or two about hardship and in particular how hard the lives of women could be. From her, Louisa would have learned a certain skepticism combined with a generosity of spirit – to hate the crime, but forgive the criminal.

By the time Louisa finally gets to the truth of this mystery, she has been led through cemeteries, locked in a cellar, and learned some very sad and dark secrets of the past.

One of her partners in this mystery is P.T. Barnum, himself a man of great secrets and mystery. So many people in the nineteenth century simply invented who they wanted to be, and became that person. Barnum was no exception, and his ability to manipulate truth as well as people forces Louisa to consider him as possible murderer. But there are other suspects as well. Just about the only thing Louisa can’t count on is that the murdered woman will speak the truth.

Research for this mystery was fascinating, learning all the tricks and acts (and there were very many) that nineteenth century spiritualists could use, from trumpets falling from the ceiling to ghosts appearing outside the window. Louisa has to keep her wits about her to keep herself and her family and friends safe, while discovering who might have hated, or feared, Agatha D. Percy enough to send her permanently to the other side!

From Louisa and T 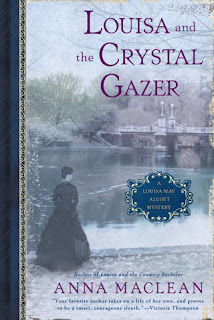 “I miss Father,” Sylvia signed one morning as we took our walk along the harbor. It was a misty cold day, and the harbor waves were tipped with frosty white.

“Unfortunately, your father passed away when you were a child,” I answered gently. “You barely knew that long-enduring man, so how do you now claim to miss him?”…

“My point exactly,” my companion responded…“I feel the need for a masculine presence in my life, and would like to converse with my father. I will, with the assistance of Mrs. Agatha Percy. Please come with me to one of her sittings!”

I groaned and jammed my hands deeper into my pocket, despite the stares of several passersby; a lady did not put her hands in her pockets. She did if they were cold, I thought. Ship rigging creaked in the wind and bells chimed the start of a new watch, and I pondered Sylvia’s statement.

Mrs. Agatha D. Percy was the newest fad in Boston, one of the recently risen members of that questionable group of individuals known as ‘spiritists,’ or mediums…

“I can think of better ways to spend time and money than sitting in the dark and watching parlor tricks. I would much rather, for instance, attend one of Signor Massimo’s musical evening.” The signor, a famous pianist, was touring the United States from his home in Rome and had decided to winter in Boston. He was giving a series of performances – performances I could not afford, since the tickets were as much as three dollars apiece, even when they were available.

“Mother tried to get tickets and could not. She was furious,” Sylvia said. I could understand; women with Mrs. Shattuck’s family name and wealth were not accustomed to hearing no.

“Look, there is ice in the harbor,” I said, putting my hand over my eyes to shield them from the glare.

“I will have your answer,” Sylvia persisted.

I introduced several new topics of conversation, hoping to distract Sylvia from her mission – Jenny Lind, the Wild West, a newly published travel book about France that was flying off the shelves – but each topic she cleverly rejoined and detoured back to Mrs. Percy…

“Don’t you see?” Sylvia sighed in exasperation, pulling at my hand to prevent me from taking another step. “The spirits themselves wish you to visit her. They put those very suggestions in your mind!”

“Then they should put a plot or two in my mind,” I said, remembering the still-blank sheet of paper before which I had sat that morning at my desk. Being between stories was an unpleasant state for me, when no plot or story threaded the random thoughts of every imagination.

“I am unconvinced that ‘fun’ is the correct word to describe an hour of sitting in the dark, pretending to speak with the dead,” I said.

“Spirits,” corrected Sylvia. “The dead don’t like to be called dead. Such a harsh word.”

Neither of us was yet aware of exactly how harsh that séance would become. 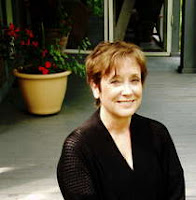 Frenchwoman (St. Martin’s Press). She has published short fiction and creative nonfiction in several journals and periodicals including American Letters and Commentary and SNReview. She is also the author of the Cornell Book of Herbs and Edible Flowers (Cornell University publications) and co-editor of The Norton Book of Love (W.W. Norton), and wrote art columns for newspapers as well as feature articles for several arts magazines. She was the recipient of a creative writing fellowship from the American Antiquarian Society and her journalism has won awards from the Council for the Advancement and Support of Education, in Washington, D.C. She teaches creative writing at Goddard College in Vermont, has taught or conducted workshops in Pennsylvania, Hawaii and New York and has traveled extensively in Europe. She lives with her husband, Steve Poleskie, in upstate New York.