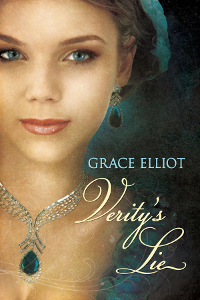 Verity’s Lie by Grace Elliot
Charles Huntley, Lord Ryevale, infamous rogue…and government agent.
In unsettled times, with England at war with France, Ryevale is assigned to covertly protect a politician’s daughter, Miss Verity Verrinder. To keep Verity under his watchful eye, Ryevale plots a campaign of seduction that no woman can resist– except it seems, Miss Verrinder. In order to gain her trust Ryevale enters Verity’s world of charity meetings and bookshops…where the unexpected happens and he falls in love with his charge.
When Lord Ryevale turns his bone-melting charms on her, Verity questions his lordship’s motivation. But with her controlling father abroad, Verity wishes to explore London and reluctantly accepts Ryevale’s companionship. As the compelling attraction between them strengthens, Verity is shattered to learn her instincts are correct after all – and Ryevale is not what he seems. If Lord Ryevale can lie, then so can she…but with disastrous consequences.
Excerpt:
Verity closed the library door and wilted.  With toe-curling embarrassment she recalled her prudish disapproval and cringed afresh.  Why couldn't she have appeared worldly and calm, instead of behaving like a stuttering, prissy schoolgirl.  And why Lord Ryevale, of all people?  If she hadn't been distracted by plans to confront her father, then she wouldn't have been caught so off guard.  Verity took comfort in that it was unlikely their paths would cross again.
Clutching Cicero against her chest like a shield, Verity composed her thoughts before facing her father, then made for the garden.  The root of her discomfort lay in noticing Lord Ryevale earlier that evening.  When he arrived, the atmosphere had changed tangibly; women became more vivacious and men bristled defensively.  He moved with the self-assurance of a pack leader and, when he passed close by, a wicked smile quirked across his intriguing lips—and Verity didn't usually notice mouths.  But more alarming still were his eyes—nut brown and intense—and when he had glanced in her direction, she felt as if he could read her mind.  Shaken, she wondered if she had inherited her mother's weakness for the opposite sex, a sobering thought that worried her.
From his wide chest and broad shoulders, to the square jaw and strong cheekbones, Ryevale filled her mind; so when she had received her father's note to fetch his copy of Cicero, she had welcomed the excuse to leave the ball and calm her wits.  That was, until she opened the library door to find the man she was running from in a compromising position with another man's wife.
After three laps of the garden, her cheeks had cooled and her mind felt more ordered.
Tonight she would seize the moment; before her father left on business, she would appeal for more freedom.  Her speech planned out, she was ready to face him.
Verity hurried along the corridor, pausing outside the study door to straighten her hair. This was it: now or never.  She knocked and, at a gruff acknowledgment from the other side, entered.
Between the gloomy room and being a little nearsighted, it took Verity a moment to assimilate three men were present: her father, the prime minister and a figure in the shadows.
"Father.  Lord Liverpool."  She squinted, trying to identify their guest.  As Ryevale stepped forward, her pulse hit a crescendo.  Alarm fluttered in her breast, threatening her ability to breathe.  "My lord."  How her voice held steady, she had no idea.
"Good evening."
He stood at ease, which irritated her.  Why did her wits scatter like pigeons before a cat when he smiled in that bone-melting way?  Annoyed at herself, she answered his smile with a glare before turning to her father.  "Your book, Father."
"Ah, Verity.  Thank you."
Her father took a cursory glance at the spine then set the Cicero aside.
Verity longed to escape, to be able to breathe and to release the tension swelling in her chest.
"If that's all, I won't intrude further."  She felt Ryevale's gaze, hot against her skin, and some unnamed sensation coiled and tightened inside.
"Ah, Verity, let me introduce my guest."
"We've already met," she replied tartly.
BUY LINKS
Amazon .com http://amzn.to/13CxrN1
Amazon.uk      http://amzn.to/12aEqI6
Author bio and links
Grace Elliot leads a double life as a veterinarian by day and author of historical romance by night. Grace lives near London and is passionate about history, romance and cats! She is housekeeping staff to five cats, two sons, one husband and a bearded dragon (not necessarily listed in order of importance). “Verity’s Lie” is Grace’s fourth novel.
Subscribe to Grace’s quarterly newsletter here:  http://bit.ly/V7T6Jd
Grace’s blog ‘Fall in Love With History’  http://graceelliot-author.blogspot.com
Website: http://graceelliot.wix.com/grace-elliot
Grace on Twitter: @Grace_Elliot
Grace’s author page on Amazon: http://www.amazon.com/Grace-Elliot/e/B004DP2NSU/ref=ntt_athr_dp_pel_1
Facebook: http://www.facebook.com/pages/Grace-Elliot/173092742739684?v=wall&sk=wall
Posted by Sandra Cox at 9:30 AM