The hh(and for those who wonder what hh stands for it's happy hubby) came into the house grumbling about critters. There was a young possum in the 'cat house' on the back porch and he was afraid it might bite the dog and give her rabies. 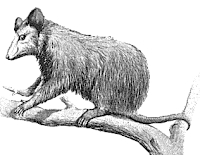 I explained that rabies in possums is a common misconception. While not impossible, possums getting infected with the rabies' virus is extremely rare. They have such low body temperature it's difficult for the virus to survive.

In spite of those appallingly scary teeth, they're really shy little creatures.

Our discussion reminded me of a true story that I've posted elsewhere and would like to share.  The story of Frankie, the possum and Darrango, the dog.

Among the many hats a friend of mine wears is that of wild life rehabilitator. One of the many animals, she rescued was a possum named Frankie.


Frankie came to wildlife rehab along with her three brothers in the spring of 2008 when she was just a baby. That's where she met an Australian Shepherd - Sheltie mix named Durango. Durango had no interest in the three brothers but it was love at first sight when he saw Frankie. Durango and Frankie became fast friends. They ate together, played together, and even took naps on the couch together.

That summer when it was time to release the possums back into the wild, Frankie refused to leave. She stayed with her friend Durango. My friend tried to release her again a few months later. This time Frankie went, but every night for six months she came home to get her possum treats (cat food and yogurt) and spend time with her friend Durango where they would stand nose to nose on opposite sides of the fence and exchange doggie-possum kisses. Durango even had a special bark that was reserved only for his friend.

In May of 2011, Durango passed unexpectedly. My friend buried him on the back of her property.  That evening, she glanced out her window and saw a shadow moving around Durango's grave so she went out to investigate. 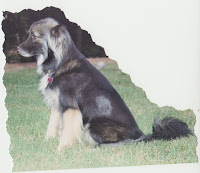 There beside the grave of his ole pal was Frankie.

When my friend called Frankie by name, Frankie 'purred' to her as she always did when my friend talked to her. Frankie lingered that evening at the final resting place of her friend before she finally headed back into the woods.

My friend hasn't seen Frankie since but there's no doubt in her mind or mine that someday, in some world, Frankie and Durango will be reunited and once again they'll eat, sleep and play....together.