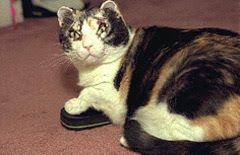 In honor of Mother's Day, I'd like to reminisce about a mother who's courage knew no boundaries, who went through flames of fire again and again to rescue her children.

In March of 1996, Scarlett was raising her little brood in an abandoned garage believed to be a crack house in Brooklyn. A fire broke out and firefighters arrived to put it out. As they got the fire under control, one firefighter by the name of David Giannelli noticed a calico cat laying outside the building with her young kittens. Fur singed off, paws and ears burnt, eyes blistered shut, the brave calico and had made the trip back into the building five times until she'd gotten out all of her kittens.

Touched by her heroism, the firefighter took her and her little family to the North Shore Animal League in New York. As he carefully placed them in a box to transport them, the courageous calico nudged each kitten to make sure they were all there, then collapsed.

The story of this little kitty's heroism soon spread around the world. The league received over seven thousand offers to adopt Scarlett and her kittens. At the time, I lived in Indiana and placed a call to the League to see how Scarlett was doing. I was told she'd had offers of adoption from as far away as Japan. Sadly, one of the kittens didn't make it, but the remaining four kits were adopted out to forever homes. Scarlett was rewarded for her heroism by being adopted into a family that loved and cossetted her the remainder of her days.

In honor of Mother's Day we're giving away four free downloads and hand crafted bookmarks this evening to one winner at Night Writers. For an opportunity to win A Hundred Dollar Bill, a romantic suspense from Sherry Morris; Vampire Island, a crossover YA; by Sandra Cox, From Hell to Heaven a contemporary romance with adult content; a download of choice from Rhobin Courtright's books; and hand crafted bookmarks from Sherry Gloag, just leave a comment on the Night Writer's Blog, mention Mother's Day and leave your email addie. If you'd rather not leave your email addie in a comment, please send it to: sandracox1@gmail.com.

www.sevennightwriters.blogspot.com
Posted by Sandra Cox at 6:23 AM