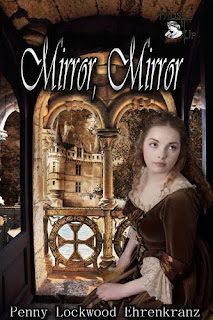 With me today is fellow MuseItUp author Penny Ehrenkranz. Not only is she going to tell us about her new releases but she's also sharing a recipe for Honey Mead.
Welcome, Penny!
Hi Sandra, thank you so much for hosting me today during my blog tour for my two r

Since both of these stories take place in the fifteen century, I’m promoting them together. Lady-in-Waiting is the tale of Mabriona, lady-in-waiting to her cousin, Princess Alana. Mabriona’s tale is one of deceit and lies. Lies which ultimately could cause her undoing. Mirror, Mirror takes Lindsey Baker on an unexpected journey to the fifteen century where she learns women aren’t treated quite as well as she would have hoped.

Since I’ve had both women sit down to eat meals, I’ve been curious about what types of foods were served. A great online resource is RenFaire, http://www.renfaire.com/Food/index.html. There is a listing of common foods as well as recipes. History tells us folks in the fifteen century ate much the same foods we do: roasted meats, vegetables, stews, soups, and breads. What might be different are the types of meats of which many were game animals such as venison and wild boar.

Since refrigeration wasn’t an option, the only way people could keep things cold were root cellars. Here crops such as potatoes, winter squashes, carrots, and beets were kept until they went bad. Pickling vegetables was a common practice as was drying, smoking and salting. Almost all households had a garden for fresh produce during the warmer months. Barley ale, honey mead, and weak beer were all common drinks as most water was unsanitary and not fit for drinking.

Lindsey and Mabriona both partake of honey mead. Here’s a recipe, courtesy of RenFair. Please note, I haven’t tried this recipe myself, so I have no idea how good it is.

Boil for one hour.

Let liquid sit for twenty-four hours in a wooden container.

Drain and strain the liquid into another vessel.

Add: ginger, nutmeg, cinnamon, mace, and cloves placed into a mesh bag and hung in the container.

Let this mixture sit for six months before serving.

Line: Through a series of misunderstandings, Mabriona is forced to live a lie, but when the man she loves awakes from his coma, will she confess her deceit?
Blurb: Mabriona is cousin to the beautiful and spoiled Princess Alana. When Alana is forced to marry a man she despises, Mabriona is torn between her loyalty to her cousin and her attraction to the handsome Prince Blayne. Tragedy befalls the cousins on the way to Prince Blayne’s castle. Servants, believing Mabriona to be Alana, refuse to listen when she tries to explain. While she waits for Blayne to recover, Mabriona meets his equally handsome younger brother, Madoc, a bard. When Blayne awakes, will Mabriona choose life with a future king, will she be sent home in disgrace because of her inadvertent lies, or will Madoc win her love with his poetry?

“Today’s the day, Mabriona,” Princess Alana said as Mabriona entered the chambers. She wiped tears from her eyes with an embroidered linen. “Prince Blayne will be here, and soon I’ll be his wife. I think the worst part of being father’s daughter is marrying someone I’ve never even met.”

“You’ve always known your marriage would be arranged for the benefit of the kingdom, Princess, but I’m sure he’ll be very nice,” Mabriona replied as she opened the heavy drapes covering the windows. She looked at her cousin and sighed. She wanted to feel sorry for Alana, but they’d had this discussion so many times. Mabriona was tired of it. Alana had known from the time she was a child that she would not wed for love. Why can’t Alana just accept her fate? Outside the day was as wet as the one before and the one before that.

“Nice? Who wants nice? I want someone handsome and dashing. A knight in shining armor who will love me forever. I certainly don’t want someone like my father who will make me do everything I don’t want to do.”

ne: Lindsay Baker’s purchase of an antique mirror sends her back in time to salvage a love torn apart by class restrictions.
Blurb: Lindsay Baker is intrigued by everything about the middle ages, but when she purchases an antique mirror and a costume to attend a Renaissance Faire, she suddenly finds herself transported back in time. There she finds she’s been called by a witch to right a terrible wrong. Graham loves Prudence, but he can’t marry her because he’s landed gentry, and she is only the baker’s daughter. Before Lindsay can return to her own time, she must convince Graham to marry against his father’s wishes. Unfortunately, she also finds herself falling for the handsome gentleman. Can she find her way back to her own time, or will she be stuck in a time when women had no rights?


After Stefany left, Lindsey adjusted the water spigots on her tub. A few drops of bubble bath went into the water, and the soothing scent of lavender filled the moist, steamy air. While the tub filled, Lindsey tried on her Renaissance outfit for the upcoming Faire. She couldn’t believe her good luck at finding the perfect pieces. She tested the bath water to be sure it was the right temperature. Then she picked up her antique mirror to get a better view. Was this a scryer’s mirror at some point in time? It slipped from her wet hands into the bathtub.

“Nuts,” she mumbled as she leaned over the tub. She pulled one sleeve up on her blouse and fished around in the bubbles for the mirror. When she pulled the mirror from the water, spots appeared in front of her eyes, and she felt faint. While she watched her reflection in the old mirror, the background changed. She no longer saw the inside of her bathroom. She closed her eyes as the room around her went black.

Sandra, thanks for hosting me today. I appreciate your support during my tour.

Wow, no sure how good that is, but it sure takes a lot to make it. I never gave a thought to what types of food they might eat. Very interesting. Thanks for sharing.

How cool! I'm a huge honey fan, so I might have to try that. Although, patience is not one of my strong points. :D The books sound amazing!

My pleasure, Penny:)
Thanks for the mead recipe:)

Hey Roseanne and Adrianna, thanks for stopping by to visit with Penny.

Roseanne and Adriana, thanks for stopping by. I don't think I'd have the patience to make honey mead either. For the longest time, I thought it was more like beer! I was surprised when I researched it.

I'd love to know how it comes out if anyone makes it!

Interesting receipe. Six months is a long time to wait for it to be ready. I wonder what it would taste like.

Susan and Patricia, thanks for following the blog tour.

Patricia, I've only been to one Ren Fair and loved it. I wish I could go again.

The honey mead recipe sounds interesting, although it takes quite some time to get to the tasting part to find out if it is any good or not.
: )

Susanne, yes it takes a long time, but I know beer making and wine making also are labor intensive and take forever to be ready to drink! With water not always safe, I guess folks had to find something to wash down their meat and potatoes!

Karen, I'll have to check out your MG novel. That's a fascinating period of Chinese history.

Thanks everyone for stopping to comment and thanks again Sandra for hosting me.