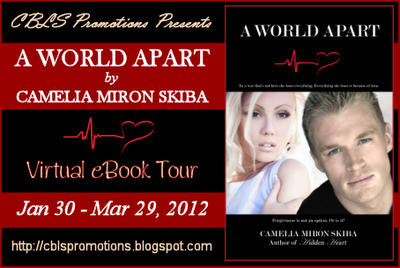 With us today is Camelia Miron Skiba to talk about her wonderful new release A World Apart and communication.

I own an iPhone, an iPad and an iPod. I have 4 email accounts, 2 Facebook accounts, one blog, and one Twitter account. I follow so many blogs I’ve lost count. I stop daily on various sites, from Amazon, to GoodReads, to Barnes& Nobles, iTunes—you name it. I read 2-3 books at once, afraid I'm somehow missing on something. At times I do feel stretched out and in some ways exposed, vulnerable. Then is when I take a step back and shut all the doors, recharging my batteries with only my family next to me.

With all this technology, staying informed and in-touch is as easy as 1, 2, 3. Communication is at its best. With a single press of a button I connect with my parents in Romania or with my sister in Germany using Skype. I don't need to wait two weeks for my letters to reach them and another two weeks to receive their reply. I don't miss out on my niece’s first words or first steps or my nephew's new haircut because we are one click of a button away.

But it also got me thinking at the times communication wasn't as easy. Compared to my son—who texts without looking at the screen—my generation wrote notes on tiny pieces of paper, switching several hands until reaching the receiver, mostly at the other site of the class. For finals girls wrote sparknotes on ... both thighs, abbreviating words only we could understand. I guess wearing a skirt had its advantages J. Guys on the other hand, wrote on their forearms. Talk about sweating bullets figuratively and literally wearing long-sleeved shirt when, without air conditioner there was no difference between the outside scorching temperatures and the classroom air.

I wish somehow I could negotiate my staying on this Earth for all the time wasted waiting for public transportation. It seemed back then time moved slower. Meeting friends at the train station for another hike in the Carpathians, going to theatre or a simple date were arranged with one phone call—couldn't call twice for father kept track of how many phone calls we made.

I have no idea how we managed to get to these places on time, but I don't recall ever being late. Today, not only are new technologies constantly discovered, but we humans have evolved, doing so many things at the same time. As if we’re in a constant hurry. To where?

Everything she loses is because of him.

Forgiveness is not an option.

Lieutenant Cassandra Toma, trauma surgeon in the Romanian National Army starts her deployment at a joint-unit air base on a wrong foot, clashing on her first day

with her new commander, Major David Hunt. Her rebellious nature and sassiness rival her excellent performance in the operating room—the only reason why she's not reprimanded, or maybe not the only reason.

They meet. They clash. A forbidden passion consumes them with the intensity of an erupting volcano, leaving her heartbroken and him with tarnished honor and pride as an officer. The only way out for David is disappearing into the dangerous warzone in Iraq. Their flame was supposed to be over when destiny brings them back under the same roof, this time with a common goal—to find Cassandra's brother, Maj. Robert Toma, kidnapped by insurgents while on patrol.

To rescue Robert, Cassandra and David put aside their resentments, uniting forces against a common enemy. Trying to forget the painful past, Cassandra opens up to give David—and their love—another chance. What she doesn’t realize is that her anguish is the result of David’s impetuous action—one reckless choice he made for which she may never forgive him.

I’m Chris’ wife, Patrick’s mom and Bella’s owner. During the day, I’m the assistant to the Director at SESE at Arizona State University, and romance’s slave at night.

I moved to the U.S eight years ago, following my heart and the man who stole it. I love comedies, historical dramas and happily-ever-after stories. English is not my native, n

ot my second, but my third language.

Some fun facts about me:

Each year I participate in one big event that requires me to physically train. My biggest sportive accomplishment was the 3-day 60-mile Susan G. Komen Walk.

Annually I pick a color I decree my favorite (this year it’s salmon).

I refused to text until 2010, always preferring to hear voices rather than sending emotionless messages. Politic bores me to death and I have no tolerance for arrogance.

“A World Apart” is my second book. My debut novel “Hidden Heart” came out March 2011.

His mistake, his secret, could cost them both the love they've finally found.