VET: Over The Mountain And Back 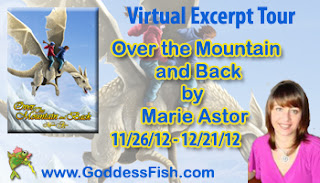 With his father gone missing and his mother losing her grip on reality, Peter Bailey’s life is nopicnic. Peter’s gray existence changes unexpectedly after he takes his new snowboard for a ride in the mountains of Colorado and is stunned to find himself in Transadonia – a hidden world
that coexists alongside with the Earth.

Lara Grover never listened to her elders, so warnings like “do not talk to strangers” mean nothing to her. When a boy from an unknown world saves her from an avalanche with the aid of a snow dragon, Lara is not stunned in the least. Instead, she joins Peter on his quest to help him realize the purpose behind his arrival to Transadonia.

Together, Lara and Peter embark on an adventure filled with perils, trickery, betrayals, and unexpected alliances.

During warm weather, the bears preferred to dine under the open sky. The dining hall was located in a clearing surrounded by maple trees. The maples were old with thick and powerful trunks, and their branches drew together closely, forming a canopy of thick leaves. There were low benches on the ground that the bears used as tables since they did not have any need for chairs. In the middle of the clearing stood a massive wooden table with attached benches, and Lara and Peter assumed that it was the seat of the Bear Charmer. The dining hall was used only during formal occasions such as celebrations or important announcements. Otherwise, the bears would dine in an unorganized fashion, breaking up into groups of their closest friends.
The kitchen bears were in charge of preparing all feasts, and they were busy delegating tasks to the other bears, instructing them where to place each dish. The bears were carrying large wooden dishes filled with chunks of fragrant roasted meat and baked potatoes. There were baked turnips and carrots, berries and freshly churned cream, and of course, honey. There was fresh icy cold water from the well to drink.
More and more bears kept arriving into the hall, taking their assigned benches. Soon there were scarcely any empty seats left, as the bears waited expectantly for the important guests who were to join them at the feast.
“There you are!” said the Bear Charmer at the sight of Lara and Peter and motioned for them to join him.
The children followed Master Auberon and sat down at the table beside him. The table could easily accommodate six people so there was plenty of room.
“I usually sit alone,” explained the Bear Charmer. “But it is good to have your company.”
The children smiled shyly since they still could not believe the transformation that had taken place in the Bear Charmer’s demeanor.

Naum took a seat at a wooden bench nearby and was joined by four other bears that Master Auberon had chosen to help Peter and Lara. The bears were proud to have been selected for such an important task, and they eyed Peter and Lara curiously. They were anxious to speak with them, but they did not want to interrupt their conversation with Master Auberon. Soon the preparations were finished, and all the bears waited for Master Auberon to commence the feast. He stood up to make a short speech.
“Bears, as you very well know, we have never had human visitors here before. But today something truly remarkable happened. These two children,” said the Bear Charmer placing his heavy hands on Peter’s and Lara’s shoulders, “have saved one of our bears. It was a simple but truly brave and selfless act that restored my faith in humankind. Tonight we shall feast and celebrate in the honor of our guests. Tomorrow our guests will have to face and accomplish a difficult task, and we shall provide them with all the support that we can muster. Difficult times are coming, and we may be called upon to play our part. I am telling you this with full certainty in your bravery and valor and with full confidence that when the time comes, we shall fight proudly together.”

Thank you very much for joining me for Over the Mountain and Back blog tour. The story of Over the Mountain and Back began over twenty years ago when I was fourteen years old and decided to write a novel as an anniversary gift for my parents. It was going to be a fantasy adventure about a boy named Peter and a girl named Lara set in a magical country, Transadonia. I remember writing studiously on the pages of an ornate notebook I had acquired especially for the occasion. Back then computers were not yet widely used, so I had to pay extra care to my handwriting. A year later, Over the Mountain and Back was completed, or at least I had thought so at the time. Needless to say my parents were very surprised with their anniversary gift.

Years passed; I finished high school and went on to college. Lara’s and Peter’s story faded from my mind, replaced by the hustles and bustles of everyday life. Then, one day – the day that happened to be my thirtieth birthday, my parents presented me with a gift: it was oblong in shape and wrapped in shiny paper. After I opened the wrapping, I was stunned to find the long forgotten story I had written all those years ago.

Long story short, after two years of extensive work, I rewrote and expanded Over the Mountain and Back into a novel of 95,000 words. For me it had been an exciting journey to be reunited with my old friends: Lara and Peter, Forest Witch Ramona, Chancellor Libra, Bookbrownies, and, of course, Carnelion, among the many others.

I hope that you will join Lara and Peter on their adventure in Transadonia.

If you would like to find out more about my books, please stop by website: www.marieastor.com.
Regards,
Marie Astor

Marie will be awarding a $25.00 Amazon gift card to a randomly drawn commenter during the tour.

The tour dates can be found here:
http://goddessfishpromotions.blogspot.com/2012/10/virtual-exceprt-tour-over-mountain-and.html

Thank you for hosting today.

Lovely cover and I love the sound of this book! Looking forward to learning more about it!

I love the excerpt, thank you.

Nice excerpt. Who doesn't love a good meal and a soft bed :)

"Bear Charmer" is such an evocative character name!

Thanks to everyone who stopped by to support Marie.

Thank you for featuring Over the Mountain and Back today!

Thank you All for your wonderful comments! I hope to see you at the next stop!

What an interesting, unexpected excerpt. Thanks for sharing.

My mind was full of lovely images as I read the excerpt. Wonderful.