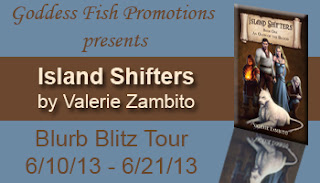 BLURB:
When your family, your home, and the very land you stand on are destroyed, what do you do?  If you are a shifter of Massa, you turn around and fight.  You fight, because the blood oath will have it no other way.

The idyllic lives of four elemental shifters living in the exiled land of Pyraan are shattered when a tour of legion duty gives witness to a brutal enemy invasion.  Despite the heroic efforts of the shifters, the land falls to the invaders.  As the only survivors, the four friends are forced to flee south into the lands from which they were banished to warn of the invasion.  Heartbroken and weary, the shifters soon learn that the safe haven they hoped to find is cloaked in danger.  Throughout a journey fraught with prophesy, betrayal and peril, an enduring friendship prevails, love blossoms, and a riveting saga unravels.
EXCERPT:
Kiernan heard them coming with her heart in her throat and leaned in closer to Beck as they lay side by side in a furrow of soil atop one of the fortifications created by the earthshifters the evening before.  The ominous sound of thousands of feet rushing toward her in the pre-dawn darkness was as frightening as it was meant to be.  Jaimes Atlan warned them that Adrian Ravener would try to intimidate them.  He would want them to make mistakes out of sheer terror.

I am with you, Princess, said Bajan, who was crouched behind her.  Do not be afraid.  Any creature that gets close will have me to deal with.

Do not make it sound like the end, because it is not.  I promise.  You will have time to torment me for many years to come.

I do not mean to torment you.

I would not have it any other way.

Despite her fright, she smiled at the Draca’s words.

The long, sinister sound of the enemy battle horn wrenched Kiernan back to the present in a rush.  Every fiber of her being urged her to run, to get away from there.

Death was coming, and she was right in its path.

Closing her eyes, she took a deep breath and drew on the power of her magic to calm her mind.  She was a warrior, she chided herself.  A protector.  If death was coming for her, it would have a fight on its hands.
AUTHOR Bio and Links:
Fantasy author, Valerie Zambito, lives in York, New York with her husband and three sons.  After having been involved in a busy sales career for twenty years, a passionate love for great storytelling, world building, character creation, and all things magic have led to the release of her epic fantasy series, Island Shifters, and young adult, paranormal romance series, Angels of the Knights.
Books:
Book One:  Island Shifters - An Oath of the Blood
Book Two:  Island Shifters - An Oath of the Mage
Book Three:  Island Shifters - An Oath of the Children
Book Four:  Island Shifters - An Oath of the Kings
Angels of the Knights - Fallon
Angels of the Knights - Blane
Classroom Heroes
Website:  http://www.valeriezambito.com/
Buy Links:
Amazon:  http://www.amazon.com/Island-Shifters-Fantasy-Series-ebook/dp/B0063EONHS
Barnes & Noble: http://www.barnesandnoble.com/w/island-shifters-an-oath-of-the-blood-valerie-zambito/1107956340
iTunes:  https://itunes.apple.com/us/book/island-shifters-oath-blood/id489783195?mt=11
Smashwords: http://www.smashwords.com/books/view/107230
Valerie will be awarding several print copies of her book to randomly drawn commenters during the tour (US only) and a grand prize of a $25 Amazon GC to one randomly drawn commenter during the tour.
The tour dates can be found here:
http://goddessfishpromotions.blogspot.com/2013/04/virtual-blurb-blitz-tour-island.html