VBT: The Rules of Dreaming 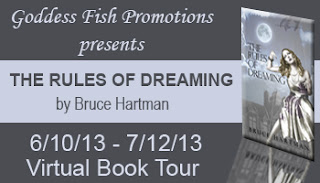 Years ago I imagined a story about a patient in a mental hospital who sits down at the piano in the patient lounge and flawlessly plays a difficult piece of classical music.  Although this usually requires years of instruction and practice, the patient’s psychiatrist discovers that he has no musical training or experience.  So the question I started with is:  Where did this music come from?  Where does any music come from?  Does music come to you as a kind of inspired madness, or does it come from outside the human mind?
Then I saw the Michael Powell/Emeric Pressburger film, The Tales of Hoffmann, which was made in 1951.  Powell and Pressburger were British directors who also made The Red Shoes and The Thief of Baghdad.  If you haven’t seen their movie of The Tales of Hoffmann, it’s definitely worth renting.  The DVD contains a fascinating commentary by Martin Scorsese, who was strongly influenced by the cinematography.  My interest in the film and the opera led to a study of E.T.A. Hoffmann, a 19-century German writer known in the English-speaking world almost entirely through derivative works (Offenbach’s The Tales of Hoffmann, Tchaikowsky’s The Nutcracker, Robert Schumann’s “Kreisleriana,” Delibes’s Coppélia, Freud’s essay on “The Uncanny”) and the stream of influence that traces back to him (Schumann, Poe, Baudelaire, Dumas, Offenbach, Doestoevsky).  Unconsciously standing knee-deep in that stream of influence, I recalled my fantasy (Hoffmannesque, without my knowing it) of a patient in a mental hospital flawlessly playing a difficult piece of piano music without the benefit of any musical training or experience.  The book took off from there.
I don’t usually do a lot of research for my writing, but in this case I did.  I researched the opera The Tales of Hoffmann and its scholarly history, the life of its composer Jacques Offenbach, the literary source material including works of E.T.A. Hoffmann and Alexandre Dumas, and a number of other topics including psychiatry and past life regression.  My research even included a visit to the E.T.A. Hoffmann house and museum in Bamberg, Germany.  This research uncovered many uncanny resemblances and coincidences that reinforced the story I wanted to tell and made it seem almost inevitable.  Having set my story in a mental hospital, I soon discovered that Freud had written an influential essay about Hoffmann’s tale, “The Sandman,” which is one of the main sources of the opera; that Hoffmann wrote a novel, The Devil’s Elixirs, anticipating various themes and incidents I had already written into my book; and that the most recent filmed version of The Tales of Hoffmann portrayed Hoffmann and the other characters as inmates in an old-fashioned lunatic asylum.  About half way through the writing I hit the wall.  I feared that I had created such a complicated maze that I’d never extricate myself from it.  I’ll leave it to the readers’ judgment whether I succeeded, or whether I’ll have to spend the rest of my life in the insane fantasy world I imagined!
BLURB:
The Rules of Dreaming
A novel of madness, music — and murder.
A beautiful opera singer hangs herself on the eve of her debut at the Met.  Seven years later the opera

she was rehearsing—Offenbach’s Tales of Hoffmann—begins to take over the lives of her two schizophrenic children, the doctors who treat them and everyone else who crosses their paths, until all are enmeshed in a world of deception and delusion, of madness and ultimately of evil and death.  Onto this shadowy stage steps Nicole P., a graduate student who discovers that she too has been assigned a role in the drama. What strange destiny is being worked out in their lives?

EXCERPT:
Late last summer, after less than two months at the Palmer Institute, I witnessed an extraordinary performance.  One of my patients, Hunter Morgan (that was not his real name), sat down at the piano in the patient lounge and started playing like a virtuoso.  Hunter was a twenty-one year old schizophrenic who had lived in the Institute for the past seven years, and as far as anyone could remember he’d never touched the piano before.  The piece he played was classical music—that was about all I could tell—and it sounded fiendishly difficult, a whirlwind of chords and notes strung together in a jarring rhythm that seemed the perfect analog of a mind spinning out of control.  He continued playing for about ten minutes and then suddenly stopped in the middle of an intense climactic passage.  Without acknowledging his audience—which consisted of his sister Antonia, his nurse Mrs. Paterson, a few other patients and myself—he stood up from the piano and ran out of the room.

Since I was new at the Institute, the impact of this performance was lost on me at first.  I assumed that Hunter had been studying the piano from an early age.  It wasn’t until later that afternoon, when I reviewed Hunter’s chart and questioned Mrs. Paterson specifically about the piano playing, that I realized how uncanny this incident really was.

“You mean he’s never played the piano before?”
AUTHOR INFORMATION:
Bruce Hartman has been a bookseller, pianist, songwriter and attorney.  He lives with his wife in Philadelphia.  His previous novel, Perfectly Healthy Man Drops Dead, was published by Salvo Press in 2008. Bruce will be awarding a fifty dollar Amazon or BN gift card to a randomly drawn commenter.

The tour dates can be found here:  http://goddessfishpromotions.blogspot.com/2013/04/virtual-book-tour-rules-of-dreaming-by.html

I think that the research would have been fascinating. I wonder if you unearthed any particularly tasty titbits?

Thank you for hosting today.

Must have been quite intersting indeed, sure it is quite the read.

What a beautiful book cover! Sounds really interesting too. And, wow this blog is gorgeous!
Cheers, Jody jodyakessler(at)hotmail(dot)com

What an interesting post, I enjoyed reading it. Thank you for the excerpt.

This story sounds fascinating, but a little sad too. Hope it ends well.

Hey Pat, thanks for stopping by.

Thanks, Jody. Appreciate that!

Thanks to all who stopped by to support, Bruce.

Sorry for the late post. I’m playing catch-up here so I’m just popping in to say HI and sorry I missed visiting with you on party day! Hope you all had a good time!
kareninnc at gmail dot com

Another excellent excerpt! Thanks so much for sharing! :)