SBB:Phantom and Demon by Laura DeLuca

BLURB: Demon, Book Two
When Justyn and Rebecca set off for the New York School of Performing Arts, they think their dreams are about to come true. To their dismay, they aren’t in high school anymore, and the competition is steep. Rebecca must compete against accomplished singers for a role in the production of Demon Barber, including a stunning Gothic diva with her sights set on Justyn

It doesn't help that things keep disappearing from their apartment or that Rebecca's father refuses to accept that Justyn is an essential part of her life. Yet, all this seems minimal in comparison to the serial rapist terrorizing the campus.

Consumed by fear and obsessed with revenge, Rebecca and Justyn start living the story of Sweeney Todd—both on and off the stage.
Blurb: Phantom, Dark Musicals Book #1:
The “Phantom” was a musical phenomenon that Rebecca had always found enchanting. She had no idea that her life was about to mirror the play that was her obsession. When her high school drama club chooses “Phantom” as their annual production, Rebecca finds herself in the middle of an unlikely love triangle and the target of a sadistic stalker who uses the lines from the play as their calling card.

Rebecca lands the lead role of Christine, the opera diva, and like her character, she is torn between her two co-stars—Tom the surfer and basketball star who plays the lovable hero, and Justyn, the strangely appealing Goth who is more than realistic in the role of the tortured artist.

Almost immediately after casting, strange things start to happen both on and off the stage. Curtains fall. Mirrors are shattered. People are hurt in true phantom style. They all seem like accidents until Rebecca receives notes and phone calls that hint at something more sinister. Is Justyn bringing to life the twisted character of the phantom? Or in real life are the roles of the hero and the villain reversed? Rebecca doesn’t know who to trust, but she knows she’s running out of time as she gets closer and closer to opening night. Only when the mask is stripped away, will the twenty first century phantom finally be revealed.
EXCERPT:
Demon
“What the hell are you looking at?” Livy demanded.

At first Rebecca just ignored her hostility. She walked back to her cubbyhole and opened it to stowaway her bags until practice was over. She was going to forget the whole stupid idea and just walk away. But Livy was still standing there, leaning against the lockers, looking just as sad as she did angry. Rebecca couldn’t help but feel sorry for her. She was reminded of how horribly everyone had treated Justyn during the production of Phantom and thought perhaps Livy was just as misunderstood.

The Goth just gave her a dirty look. “I don’t know what we could possibly have to say to each other.”

“I just wanted to apologize about what happened at the party,” Rebecca spoke with as much sincerity as she could muster. “No matter how we feel about each other, I never meant to … to embarrass you the way I did.”

“That’s not what I meant,” Rebecca tried to explain, though she knew she was fighting a losing battle. “I just regret—”

“Do you want to know what I regret?” Livy interrupted and actually shoved Rebecca against her locker. “I regret not ripping every strand of hair out of that pretty little head of yours when I had the chance. This isn’t high school, Becca! We aren’t going to be friends. And I’m not going to stop until Justyn is mine and you run back to New Jersey with your tail between your legs. Is that clear enough for you, deary? Don’t try to make nice with me again.”

Livy stomped away, and Rebecca just stood there, feeling shocked and a little stung. She couldn’t believe how vicious Livy could be. So much for olive branches. Instead of trying to hand her one, Rebecca should have shoved it straight up her….

“Wow.” Frankie came up beside her, shaking his head. “It’s girls like that who give PMS a bad rep. I seriously think the next play she should star in is the Taming of the Shrew.”

“There’s no taming that one,” Rebecca replied, still shaking her head.
AUTHOR Bio and Links: 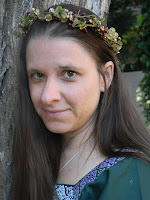 Laura “Luna” DeLuca lives at the beautiful Jersey shore with her husband and four children. She loves writing in the young adult genre because it keeps her young at heart.  In addition to writing fiction, Laura is also the editor of a popular review blog called New Age Mama. She is an active member of her local pagan community, and has been studying Wicca for close to eight years.  Her current works include Destiny, Destiny Unveiled, Phantom, Morrigan, Player, and Demon.
Social Media Links:
http://authorlauradeluca.blogspot.com
www.twitter.com/authorldeluca
www.facebook.com/authorlauradeluca