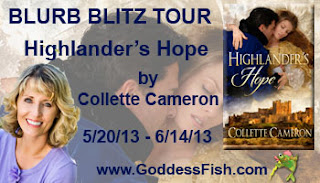 BLURB:
Not a day has gone by that Ewan McTavish, the Viscount Sethwick, hasn't dreamed of the beauty he danced with two years ago. He's determined to win her heart and make her his own. Heiress, Yvette Stapleton, is certain of one thing; marriage is risky and, therefore, to be avoided. At first, she doesn't recognize the dangerously handsome man who rescues her from assailants on London's docks, but Lord Sethwick's passionate kisses soon have her reconsidering her cynical views on matrimony. On a mission to stop a War Office traitor, Ewan draws Yvette into deadly international intrigue. To protect her, he exploits Scottish law, declaring her his lawful wife—without benefit of a ceremony. Yvette is furious upon discovering the irregular marriage is legally binding, though she never said, "I do." Will Ewan's manipulation cost him her newfound love?
EXCERPT:
Highlander's Hope Excerpt-London Inn Scene
Ewan jolted awake. “Merde.”

He had fallen asleep with Yvette in his arms. Shooting a worried glance at the window, he recognized the first golden blush of daybreak sweeping across the hazy sky.

Sucking in a strangled breath, he grasped the inexperienced hand fondling him. Blast it. The towel had come loose while he slept, of course.

“Yvette,” he whispered as she showered kisses across his bare chest and neck. Grasping her roaming hands, he ensnared her in his embrace, and raised his voice. “Yvette, wake up.”

He gave her a gentle shake. Dark lashes trembled, rising to reveal drowsy eyes. A smile lit her face when her gaze met his. She lifted her hand, caressing his face, her fingers lingering on his scar before she raised herself up and kissed the mark. Caught up in the powerful spell, he almost forgot himself. He fought the urge to throw reason to the wind and kiss her with all the desire he was holding in check. “Yvette. . .”

Ewan knew the moment she awoke. He felt her stiffen in his arms and heard her small cry of shocked dismay. She pressed at his chest with both hands. He released her and watched her scramble across the bed. She stopped in the middle, facing him. Her hair swirled around her, settling in shimmering waves about her hips.
Dawn’s glow lit the room. He could see her expressions. Shock—followed by confusion, then complete horror as she realized the full scope of her situation.
AUTHOR INFORMATION:
A life-long Oregonian, Collette Cameron was born and raised in a small town along the northern Oregon coast. Today she makes her home in a rural community, 30 minutes west of Portland. Her Victorian farmhouse sits on a one-acre certified wildlife habit, interspersed with a plethora of gardens: English, rose, butterfly, rock, water, and of course, vegetable.

A voracious reader of romance since her teens, she even named her daughter after a heroine in her favorite romance novel. An enthusiast of times gone by, and anything related to romance, she writes Historical Romance, with a dash of inspiration, a pinch of humor, and a liberal portion of suspense.


Collette will be awarding a gift basket that include a gift card, blue rose tea cup, blue rose soap, vintage looking cameo pendant, shortbread, tea, and other goodies to a randomly drawn commenter during the tours.

The tour dates can be found here:  http://goddessfishpromotions.blogspot.com/2013/02/virtual-book-tour-highlanders-hope-by.html