The silver chinchilla is a division of the shaded Persian. One of the distinctive markings that make these cats such beauties is the black mascara outline around their eyes. They have doll faces instead of Peke faces. Doll faces have the head structure of the original Persians before the noses were shortened. The Chinchilla is lighter weight than most Persians. It can weigh as little as four pounds. The black tipping at the end of the hair shaft gives the Chinchilla's coat a shimmery quality. The ear tufts, tummy and chest are solid white. Their beautiful eyes are either green or blue-green. It is difficult to tell a chinchilla from a shaded. The shaded has deeper black tipping at the end of the hair shaft than the chinchilla. The chinchilla's tipping is an 1/8 of an inch and the shaded is a 1/3.  Personality? They've got it in spades. They're gentle but intelligent creatures and are considered to be one of the healthiest breeds of Persians.
Below is a pic of my sis modeling with one of the Fancy Feast Cats. Since the company she works for makes pet food, she gets to meet a lot of the celebs in the animal world. Isn't this ball of fluff gorgeous? I had to really study the picture. It looked so perfect, I thought it was a stuffed animal. The Fancy Feast Cats used in commercials that are made in the US, South Africa, Europe or Japan are silver chinchilla Persians. To adopt check your local shelter, rescue, petfinder.com or overstock.com. 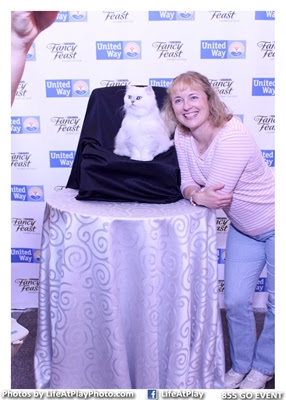 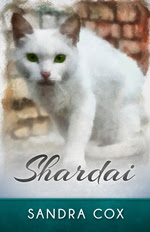 Shardai is a large, sleek cat with attitude. He has the courage of a tiger and the disdain of a king. The fearless feline has only one weakness...his guardian.  He would do anything, even come back from the afterlife, for her.
Amazon 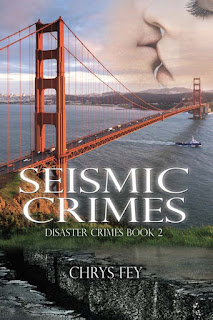 Today is the release of Chrys Fey's first novel!

An Internal Affairs Investigator was murdered and his brother, Donovan Goldwyn, was framed. Now Donovan is desperate to prove his innocence. And the one person who can do that is the woman who saved him from a deadly hurricane—Beth Kennedy. From the moment their fates intertwined, passion consumed him. He wants her in his arms. More, he wants her by his side in his darkest moments.
Beth Kennedy may not know everything about Donovan, but she can’t deny what she feels for him. It’s her love for him that pushes her to do whatever she has to do to help him get justice, including putting herself in a criminal’s crosshairs.
When a tip reveals the killer's location, they travel to California
Amazon / Barnes & Noble / KOBO / The Wild Rose Press