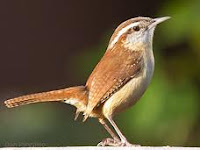 I usually sit out on the porch, and under the guise of working, watch the birds. When I got home Friday night, the view was up close and personal. A little Carolina Wren had found a hole in our screen and had decided to stop by and say hello.Unfortunately, once in he had no earthly idea how to get out. For forms sake, I'll call him a he, going on the assumption a she would have figured out how to get back outside;) For any guys reading this, I'm just pickin' with ya. But back to the story.
We had no more of an idea how to get the little guy out than he did. The cats were also grousing.  Here was this fascinating new toy and we wouldn't let them out to play with it.
After much deliberation the HH got a shoe box. We put sunflower seeds and bread in it. Both of which were met with the disdain they deserved. This guy wanted insects, thank you very much.  You think herding cats is tough, trying herding a bird.  Back and forth across the porch we went. The bird would come almost right up to us, but we were both rather squeamish about trying to pick it up. Besides the possibility of damaging it, the HH didn't want pecked and I didn't want to feel the mad fluttering of wings and his little agitated heartbeat against my palm. After over an hour of walking him around the porch, the HH herded him into the box, slipped the lid on  and took the wren outside to freedom.
My hero.