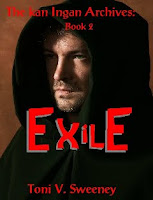 d two books released within a week of each other! The same thing happened when Sinner, Book One of the kan Ingan Archives came out, and now, history’s repeating itself with Exile, Book Two. The other book is my futuristic novel, Earthman’s Bride, being re-released by Class Act Books on April 15, 2012. I certainly hope it doesn’t happen again with Book Three, because I’m running myself to a frazzle, trying to promote both books without repeating myself.

These two books—Exile and Earthman’s Bride—couldn’t be more different, yet, in an odd way, they’re also a bit alike. One’s about a dynasty which has ruled a planet for over 3000 years, the other concerns a people’s fight against aliens who invade their planet and one woman’s sacrifice to free her people. Common denominator? The aliens in both cases are from Earth.

One thing about writing about a dynasty, it covers a lot of territory and a whole lot of people...centuries of events...millennia of generations... I took the easy way out. I decided to write about the beginning and the end of a dynasty—the rule of the kan Ingans of the Emeraunt Galaxy. My series, The Chronicles of Riven the Heretic (Bloodseek, Blood Curse, A Singing in the Blood, and Barbarian Blood Royal, and soon to come, The Man from Cymene) told of the kan Ingans' origins. My series, The kan Ingan Archives, told of their inglorious end thirty-one hundred years later. I’ll admit I “borrowed” a bit of the plot from an old Greek legend: Phaedra. You know, the one about the young wife who falls in love with her stepson and tragedy follows? But I gave it my own little spin and made it different enough. Spoiler here: The young man doesn’t die. He’s exiled, which to someone like Aric kan Ingan—handsome, pampered, and titled—is almost like dying. When I was finished, and patting myself on the back, I realized it was begging for a sequel, so I began that, but as usual with characters with which I have more than one dealing, familiarity bred contempt—and Aric yanked the plot out of my hot little hands, and, in his superiorly Arcanian way, took over. I paid him back though. In his exiled wanderings, I set him down on a small planet where only a mining colony existed, made him a guard, and surrounded him by…gulp!…Earthlings, hundreds of them, and he’s the only person there who’s not from Terra. That definitely did something to that colossal Arcanian ego, believe you me.

rted out as a short story which then decided it wanted to grow. Like Phaedra, the story has been told many times before with many variations. I imagine there’s probably a Greek myth about it, too: a young woman given to a conqueror as part of a peace agreement...he desires her...she fears him...eventually they fall in love...

The villains in this story are Earthmen, and definitely not nice people. Having depleted their own natural resources, they head to the stars looking for planets having the elements they lack, and they were ruthless in their determination to get what they wanted. They’ve been fighting a war for 30 years, and now, the rebel leader asks for a truce, offering his daughter as part of the negotiations. Rebeka has been charged with a difficult task…made the Earthmen’s leader fall in love with her and then kill him, and free her people forever.

Of course, Rebeka and Philip fall in love, and that should solve all the problems, but there’s an Artifically Intelligent fly in the ointment…Darius, an android programmed to protect Rebeka. Unknown to everyone, Darius has an empathy chip which enables him to experience emotion, and he’s fallen in love with Rebeka, too…

Aric kan Ingan has to make choices when his uncle returns to Arcanis with his young, Terran wife, and those choices get him exiled to a planet where’s he’s no longer royal and living the lowest life possible. Rebeka, Philip, and Darius also have choices to make and theirs are no less dangerous and heart-rending than Aric’s. Each decision carries with it the possibility for emotional as well as physical tragedy and calamity, and the greatest probability of all…death to those involved.

What do they do? How will their stories end?

Unh-uh, I’m not telling. Buy a copy of Sinner, Exile, or Earthman’s Bride—or borrow a friend’s—and learn for yourself. (I’d appreciate it if you’d buy the copy, of course!)

What do you do if you’re guilty of a crime--but not the one for which you’ve been convicted?

Aric kan Ingan is a Non-Person, an Exile, stripped of title and citizenship for treason against the Arcanian Empire, crimes of which he is innocent. Caught in the intrigues of a secret society determined to overthrow his uncle’s rule, Aric is accused and arrested, then compelled to allow the evidence saving him to be destroyed when the rebels threaten to reveal his affair with his uncle’s Terran wife. Aric has wandered the Emeraunt Galaxy a lonely decade, and now, destitute and addicted to the two most powerful substances in the Galaxy, he enlists as a guard for a Terran mining colony. Though he doesn’t know it, he’s about to meet the two people who’ll become the most important in his life.

For 30 years, Rebeka Spearman’s people have been at war with the Edarthmen who invaded their planet. Now, her father wants a truce and offers his daughter to Philip Hamilcar, the Terran’s leader in exchange for peace. Unknown to Philip, Rebeka has her own agenda; she’s to make him fall in love with her, lull him into trusting her, and then kill him, and end the Earthmen’s hold over the planet once and for all.

It’s a great plan, and it might work, except for one thing.

Rebeka and the Earthman have fallen love.

Will Rebeka ignore her people’s plight for her own happiness, or will she give us her love to free her people?

Earthman’s Bride placed first in the 2008 Maryland Romance Writer’s “Reveal Your Inner Vixen” contest in the alternate/SF category. It will be available from Class Act Books on April 15, 2012:

Trailer for Earthman’s Bride: http://youtu.be/6WiF7HFIYN0
Posted by Sandra Cox at 5:08 AM