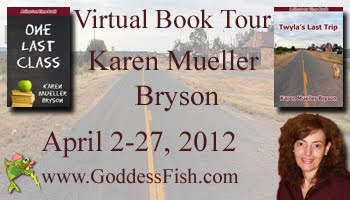 I asked Karen were she would visit if she were taking a trip on Route 66 and here was here response:

If my husband and I were able to take a Rt. 66 trip, there are a number of places I would want to visit.

My first stop would be at Ted Drew's Frozen Custard Stand outside St. Louis, MO. I was only there once, with my dear friend, who died of cancer, and to whom Twyla’s Last Trip is dedicated. I would introduce my husband to the tasty treat and have one in my friend’s honor.

My next stop would be the Stubby Stonehenge in Rolla, MO. I was fortunate enough to have visited the actual ancient megalith in England, but I would be interested to see this partial reproduction. I’m sure it’s better than the Mini Stonehenge from This is Spinal Tap! J

I would not want to miss The Blue Whale of Catoosa, OK. The giant cement whale’s smiling face is irresistible. I would also stop and see the Cadillac Ranch near Amarillo, TX. No Rt. 66 road trip would be complete without viewing the 10 wildly painted cars planted in the desert.

Although I reside in Arizona, there are several Rt. 66 sites I have yet to see! I would visit the town of Jerome, which in known as America's Most Vertical City because it is set on a mountainside. The town is also known for its unique shop and art galleries. I would also visit the London Bridge in Lake Havasu City, Arizona. I also love lighthouses and Lake Havasu is said to be home to more lighthouses than any other city in the U.S In addition, I would take time to go “off the path” and finally visit the Grand Canyon. (I know it’s hard to believe I live in Arizona and have yet to see this natural wonder!)

In the romantic comedy, One Last Class, thirty-two year old, Zak Spencer, is a washed-up teen idol, who decides to rebuild his life by returning to college in Arizona. Trouble ensues when Zak falls in love with the young professor, Amy Campbell, who teaches the one class he needs to complete his degree.

In the romantic comedy, Twyla’s Last Trip, twenty eight-year old, Lucinda Starr is an uptight research psychologist, whose deadline to complete her doctoral dissertation is completely derailed by her estranged mother, Twyla Starr's sudden death. Lucinda must take her mother's ashes on a road trip on Route 66, in order to fulfill the requirements of her will and inherit her fortune. To make matters worse,

Lucinda finds herself forced to travel across the country with her mother's easygoing country lawyer, T.J. Yates, who drives her crazy, and his drooling bloodhound, Dakota, who Lucinda finds revolting.

Lucinda peered intently into her microscope until Bunny's voice blared from the intercom—again. “I'm sorry to bother you, Lucinda, but Mr. Yates is on the phone. He says he won't hang up until he speaks with you personally.”

Lucinda took a deep breath, stood and exited the lab. She marched over to the reception desk and ripped the phone from Bunny's grasp.

“Lucinda Starr,” she growled into the phone. “How may I help you?”

Thirty-year old T.J. Yates, the epitome of all things country, spoke to Lucinda from his cell phone. “Miss Starr,” he said. “I know we've never met but I've been your mom's attorney now for nearly a decade.”

“Will you please get to the point?” Lucinda interrupted. “I'm in the middle of an extremely important experiment.”

“I hate to be the bearer of bad news but your mom has passed away.”

Lucinda flinched slightly but then it was back to business. “And what does this have to do with me?” she asked.

“Well, Miss Starr, you are the sole beneficiary of your mom's estate.”

“Estate?” Lucinda snorted. “My mother was a cat lady, who lived in a trailer.”

Before T.J. could finish, Lucinda slammed the phone into the receiver and hurried away.

T.J. looked at his cell phone dumbfounded. People never hung up on him, especially women.

Dakota, his two-year old bloodhound, glanced up from her doggie pillow and gave her head a tilt.

“I think this requires a little trip up to Chicago,” T.J. said.

Dakota just yawned and plopped her head back down on her bed. 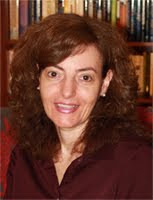 Karen Mueller Bryson is an award-winning screenwriter, produced playwright and published novelist. She has been writing since she learned to read and fell in love with books! Karen is the creator of Short on Time Books, a series of fast-paced and fun novels for readers on the go. When she’s not at her computer creating new stories, Karen enjoys spending time with her husband and their bloodhounds.

Karen will be giving away a $25 Amazon GC to one randomly drawn commenter during the tour.
Posted by Sandra Cox at 1:52 AM