Where to begin?
Maybe with the assassination of a big ass, brown, fuzzy spider the night before a showing...or the brown stain I saw on the ceiling....or the day spent in Urgent Care with the hub's.

Okay, I'll start with the brown stain on the basement ceiling.
We had a last minute showing scheduled for the next day and I was in cleaning-frenzy mode. The hubs asked for a grilled cheese. Seriously, take the time to grill a sandwich plus dirty a skillet? Really? What was he thinking? Never fear,  I didn't starve him, I did fix him a TV dinner which required dirtying zero dishes.  It was after the TV dinner, I went downstairs and saw the brown stain on the ceiling.
OMG.OMG. Total panic. How does a brown stain get on the ceiling?  My mind immediately leaped to plumbing issues. What else could account for a brown stain? Reason reasserted itself when it dawned on me there was no plumbing in that section of ceiling. Okay, I went from fear to spooked. How did that brown stain get there? Very woo-woo. After stewing about it for awhile, I finally figured out the answer.
The hub's had spilled a cup of coffee the day before when I was at work and since he couldn't bend had left it. It apparently soaked through the floor to the ceiling below. Whew. I never thought I'd be so relieved over a coffee stain.
As I'm painting over the spill, I glance to my right and there's the mother of all spiders. Big. Brown. Hairy. As close as I can tell it was a Huntsman Spider. Harmless and shy. Ha! It doesn't look harmless and shy, it looks like a brown tarantula. Arming myself with a dust rag, I grab him up and throw him outside. I'm a big believer in live and let live unless its ants. I do exterminate ants.  And mosquitoes.
With the removal of the spider and the mystery of the stain solved, things calm down for the night, if not the rest of the week.
The hub's wakes up with a rash covering his body so off we go to urgent care where we spend the majority of the day.  They do blood work, take him off his meds, prescribe new ones and tell us if that doesn't work its back to the hospital he goes.
Fingers and toes crossed that from here we go back to our uneventful routine. 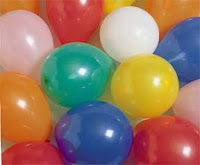 Oh yes and did I mention we discovered the hound is terrified by those horrible helium monsters that we humans know as balloons? We discovered this when I brought the hub's home from the hospital. But in every cloud there's a silver lining. The hound is not supposed to go upstairs but since she flouts authority she usually makes a trip up there about every other night. I have no doubt her sole purpose is to annoy me. The hub's got the brilliant idea to put the balloons at the top of the stairs. It worked like a charm. She hasn't ventured upstairs since the helium monsters were placed at the head of the stairs. The down side...listening to her growl at them.

What an exciting week! The spider would have me hitting the high notes!

Yeah mosquitoes need to die hahahaha that is a good trick with the balloons, funny what pets are scared of.

Hi Pat and Dez, I'm thinking about getting some balloons for the kitchen table and counters. grin