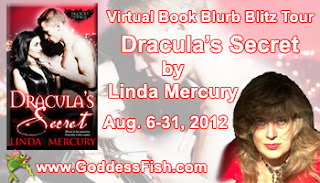 SHE HUNGERS FOR HIS LIGHT
She calls herself Valerie Tate. One of the few vampires left on earth, as beautiful as she is powerful, Valerie has resisted her craving for human blood for years, just as she once hid her true gender. But the night she lays eyes on the most enticing man she’s ever seen, it’s game over. He radiates goodness and light—and searing sexual energy.  Valerie must have him. Taste him. Consume him. For he is temptation—and he is her destiny…

HE BURNS FOR HER DARKNESS
Lance Soleil is a rugged war veteran who runs a homeless shelter in Portland. At first gaze, he knows what Valerie is—and wants her even more. But when he welcomes a pack of werewolves into his shelter, he attracts the attention of Valerie’s oldest rival—her bloodthirsty brother, Radu, who hopes to become the first vampire President of the United States. Valerie knows Radu has a hidden agenda, and with Lance’s help she is determined to stop his unholy rise to power. But first, she must risk their growing love by fully revealing herself—as the one and only Dracula…

She swam in an ocean of blood.

The exhausted, dark-haired mother howled in pain and freedom as the crown of a baby’s head emerged from between her legs. The woman panted and heaved, thrashing her sweat and gore-drenched body from side to side. Snow mixed with thunder and rain lashed the tower of the family castle, chilling the already icy room.

Vlad Dracul crouched at her feet, his face stiff and set under his moustache. His outstretched fingers curled into fists and opened again as he waited for the infant to emerge. Blankets, rags, and a pot of steaming water at his elbow kept him company. His jaw clenched with every echoing scream and his shoulders tightened with every passing moment. Not even the usual rushing of the river below covered the cries of Cneajna, his wife.

The violent storm outside had prevented the midwife’s presence. Earlier in the night, the mother had demanded that only Vlad remain with her as the pain worsened. No one defied Cneajna, even as water and blood rushed down her legs and painted her body. Vlad knew, however, that the women of the castle waited in the downstairs chamber, ready to help if he called. He was absurdly grateful for their nearness.

Fearless in the face of death, Vlad had nearly fainted at the sight of his wife in labor. The smell of the birth blood that saturated the bed roiled his stomach in ways a festering abdominal wound never did.

Another contraction. She pulled the ropes tied to the fur-lined headboard of the birth bed. The wood groaned under her strength as wave after wave of labor shuddered her body. Vlad’s heart winced at his woman’s pale, sweating face.

Another scream shook the room and Vlad saw the first peep of a black-haired head. Under the power of the mother’s undulating body, a tiny, angry face emerged. 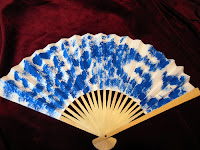 Linda will be awarding a hand-painted fan to a randomly drawn commenter during the tour.

Tour dates can be found here:  http://goddessfishpromotions.blogspot.com/2012/07/virtual-blurb-blitz-draculas-secret-by.html
Posted by Sandra Cox at 4:00 AM