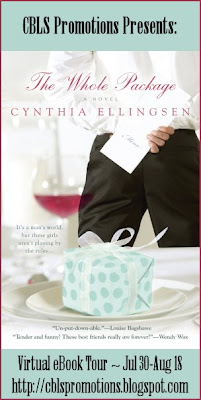 Blurb:
Life has thrown childhood friends Jackie, Cheryl, and Doris a few curveballs. Widowed and broke, Jackie returns home after an extravagant life in Paris, Doris is reliant on anti-depressants, and Cheryl’s plans for a corporate take-over are replaced with walking papers. But after a drunken night sampling the delights at strip club for women, the ladies stumble upon a genius idea and decide to open up The Whole Package—the world’s first restaurant staffed exclusively by very attractive men. Armed with Jackie’s connections, Doris’ ambition, and Cheryl’s business sense the ladies set out to make their mark in the world.

Excerpt:
French is a sexy language. Except, of course, if you are standing in line at a French café and the French you hear is a nasal, drawn out, “Fat American.“ Unnecessary, especially if you are simply trying to buy a chocolate croissant to dip into the first cappuccino of the day.

Jackie - and yes, it was Jackie and not Jacqueline even though she was closing in on forty instead of the throat of the snickering girl behind her – whirled around.

“Did you just call me fat?”

A French girl stared back at her. The girl had the audacity to cock her head. A yes.

Jackie was stunned. Okay, fine – and a little hurt. Such a judgment was the last thing she expected in this cheerful neighborhood cafe with its brightly painted walls, kitschy produce art and erratically placed wildflowers. Even the French sayings on the wall, written in such careful, scrolling script were meant to inspire good cheer, not snappy little insults.

“Well, I am not fat!” Jackie said. And this was not in French, because after two years in the country she spoke French perfectly and proving it was no longer important. “I am sexy.”

A mustached host had been writing out specials on a blackboard with squeaking chalk. At this, he paused and took a look. Jackie ran her palms over her curvy hips and considered giving a slight shimmy. The man gave a nod in agreement and went back to the specials.

The French girl sniffed. She was dressed all in black, a total cliché. She was holding a sniveling, trendy dog. Its shaky face was framed by a bejeweled collar and its droopy eyes stared, along with everyone else in the cinnamon scented café.

Jackie’s jaw dropped. Drawing herself up to her full height of 5’3” (5’6” with her three inch pumps), Jackie said, “If you want to live off of cigarettes and red wine and ignore the delicacies your country has to offer, you go right ahead. But I would rather get chased out of Le Bon Marche by a firing squad than strut around in a body that looks like it was stolen from an eight-year-old boy.”

“I am going to embrace my sensuality,” Jackie said. “I am going to improve upon it. And,” she stood a bit taller, “it is gonna happen with a chocolate croissant.”

Reviews:
"The friendship between the women is realistic, the characters funny, and the premise well-executed. Readers will giggle and grin from start to finish, and will surely be eager for Ellingsen's next novel."--PublishersWeekly.com

“The Whole Package is a delightfully frivolous romp. An excellent beach read, this light but enjoyable fare will have you chuckling (and likely blushing!) throughout...”--RT Reviews

About the Author:
Cynthia Ellingsen is a fiction writer and screenwriter. She lives in Lexington, KY with her husband.

a Rafflecopter giveaway
Posted by Sandra Cox at 4:00 AM