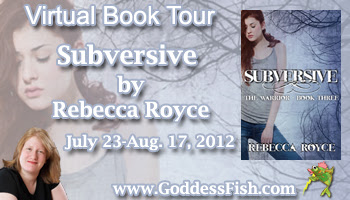 With us today is Rebecca Royce talking about her new release Subversive. I asked Rebecca if Rachel had a nontraditional way of killing vampires, if her vampire hunter had a different spin than the norm.

In one sense, Rachel kills vampires very traditionally.  She stakes them.  But, it’s a little bit more complicated than that.  Rachel doesn’t just fight alone (if she can avoid it) she fights with a team.  They each have a role.  So the key is that she is not by herself when she takes down the vampires. Although she has had to figure out how to beat them solo on occasion.
Also…sometimes she doesn’t win.  I think that’s a little different than most vampire hunters.
Thanks so much for having me today!

Rachel Clancy has been through a lot. She’s been sent to fight vampires, lost two boyfriends—one to a vampire and one because of his daddy issues—and now she is trying to lead a secret revolution that could change Genesis, her home, forever. Her confidence is shot, her hands are shaking, and she hasn’t felt a real emotion, except for anger, in a long time.

But Rachel should never be counted out. She sees things others can’t, even if her ideas are considered downright traitorous. There is an important life for Rachel to lead in the world, even if its filed with vampires and werewolves instead of romance and flowers. Rachel has always had to fight, she’s good at it, and the evil that has stalked her hasn’t forgotten her name.

As a teenager, Rebecca Royce would hide in her room to read her favorite romance novels when she was supposed to be doing her homework. She hopes, these days, that her parents think it was well worth it.

Rebecca is the mother of three adorable boys and is fortunate to be married to her best friend. They live in northern New Jersey and try not to freeze too badly during the winter months. 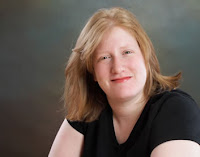 She's in love with science fiction, fantasy, and the paranormal and tries to use all of these elements in her writing. She's been told she's a little bloodthirsty so she hopes that when you read her work you'll enjoy the action packed ride that always ends in romance. Rebecca loves to write series because she loves to see characters develop over time and it always makes her happy to see her favorite characters make guest appearances in other books.

In Rebecca Royce's world anything is possible, anything can happen, and you should suspect that it will.