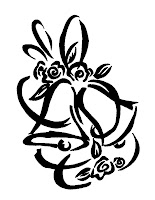 About my brother's wedding....My family and the Murphys are very tight. You know the Murphys? The ones who invented Murphy's law: Whatever can go wrong will go wrong.
The bride and groom wanted a no-muss no-fuss stress-free wedding and opted for a justice of the peace.
The big day arrived. It was to be small, family only, but folks had come in from Florida, Pennsylvania, and Missouri.
We all went to the county jail were the magistrate's office was located. I'm sure the pundits out there can find all kinds of symbolism for the location.
But seriously, what could possibly go wrong......
My brother had taken care of the paperwork in advance, signed everything he was supposed to. We were minutes away from the ceremony. He handed the paperwork to the magistrate and poof  the stress-free piece went up in smoke.
The magistrate informed him she couldn't marry them. Why, you ask. Good question. We were all asking the same thing, even after the magistrate explained.
It seemed the clerk had signed the license but hadn't dated it. Since it wasn't dated, the magistrate didn't feel she could legally marry them, even with backup documentation. Since it was a Saturday, the clerks office was closed and he couldn't go back to get it dated.
The magistrate performed the ceremony, but told him it would have to be done 'legally' at a later date.
Collective sigh.
Monday he and his fiancee went back, with my sister--who he was driving to the airport--in tow.  The  employees at the clerk's office apologized profusely, saying they'd sent licenses over before with no dates and there'd never been a problem and if someone had called the clerk she would have came in and dated it. YadaYadaYada.
After getting the paper dated, he goes back to the magistrate where he's told he'll have to wait till twelve when the magistrate who wouldn't marry him the first time will be in. Keep in mind, he still has to get my sister to the airport and himself to work. Then they tell him he's only got one witness. This is quickly rectified by asking a police officer to act as the second witness.
Once again my brother and his fiance say their vows in front of the magistrate. This time she signs the paperwork.
Hurray!
And the moral of this story: There's no such thing as a stress free wedding. What can go wrong, usually does.
But on the upside...they get to celebrate two anniversary dates for the same wedding.
What about you? Got any wedding stories to share?
Posted by Sandra Cox at 4:00 AM