VBT The Fire of Thieves 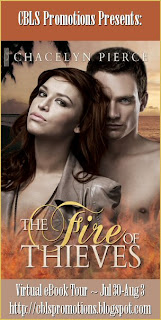 With us today is Chaselynn Pierce. Chaselynn, I love your premise. Can you tell us where the idea for Fire of Thieves came from?
It came to me in my sleep—I know that's so original. So I want to clarify and say that the "spark" of the story came to me in my sleep but it didn't fully become something tangible until I hunkered down and pulled out all the ammo. Movies and music are what made The Fire of Thieves. Snatch, the Ocean's trilogy, The Thomas Crown Affair, and even Salt, helped me solidify the story.
What are your thoughts on self-publishing?
I believe for some it has worked wonderfully. I think it's a great avenue if you do it correctly with proper editing. I have a few titles that I would like to see self-published.
What is your favorite genre to write in?
Paranormal Fantasy, hands down. There is nothing like creating a world full of monsters that may or may not like each other. There is romance when there shouldn't be, gangs/pack/coven disputes, human killings, and one big bad boss wanting to rule them all. That gets my heart racing and my fingers twitchy to create something new.
What is your favorite genre to read?
I'm a Paranormal and Fantasy geek. Everyone says it's shocking that my first release is a Contemporary because I've always got my head buried into an otherworldly book.
What tips would you give someone trying to break into the writing industry?
Don't do it alone. I did the solo thing and it doesn't work. You need to outsource and you need input and critiques from people that have been in the business for a while.
Title: The Fire of Thieves
Author: Chacelyn Pierce
Publisher: Silver Publishing
Length: 37,000 words
Genre: Romance
Sub-Genre: Contemporary Romance
Sub-Categories: Action/Adventure

Blurb:
Caitlyn McCollum and Katie Summerly have radically different lives. Caitlyn is a jet-setting thief, traveling the world with the handsome, uncompromising Jerrick. Katie curates art exhibits and just moved in with Ethan, her dependable new boyfriend. Katie and Caitlyn are two sides of the same woman, sharing a single heart with separate yearnings. Caitlyn lives for the adrenaline rush of her secret life, the passionate nights she shares with Jerrick, and her unyielding dedication to her first love. Katie wants a simple life with Ethan, free of Jerrick's manipulations and emotional distance. Her heart must choose or risk losing both men. Yet, as her last adventure unfolds, Caitlyn finds that love itself is the price of her final heist.

Excerpt:
Waiting gave her too much time to think--time to second guess herself. However, there was nothing she could do about it now. Already committed, she had a job to do. A cold bead of sweat licked down her spine like a lover's tongue, which was ridiculous because the heat could've put Hell to shame. Her spandex suit clung to her curves like cellophane, and a restless breath escaped her lips as she stood within the shadows of a cobblestone wall. Caitlyn focused on the task at hand as she watched a young driver pull the limo around to the front of the mansion. Scanning the large acre of front lawn, she contemplated the time it would take to clear it. The yard would be a lot of ground to cover, more than she was used to, but nothing she couldn't handle. Everything had been mapped out and she'd gone over the blueprints beforehand. Twice. She could do this, had been born to do this. She studied the man she'd be thieving from, a typical blue-blood with inherited money, too much to spend in any one lifetime.

On Friday nights Mr Guillory had the habit of taking a young date out to the theater, then to dinner which normally lasted four to five hours. A good window of opportunity for Caitlyn to get what she needed and be home before Guillory knew he'd been robbed.

Tonight, Mr Guillory's date was a busty blonde whose phony laugh carried over the wind. Cheap happiness, and he had to know it. Yet, a fifty-year-old billionaire toting a twenty-something jewel was a statement to his peers. He guided her with an overeager hand to the limo's back door, and the driver opened it hastily. The blonde bent over to get into the back, probably offering a clear crotch shot to the two men. Guillory slid in next to her, licking his lips as if he could taste her heady musk before dinner.

From the dark shadows of the mansion wall, the exchange seemed too ridiculous for Caitlyn to watch any further. When the black stretch limo traveled through the iron gates, she stealthily made her way across an acre of manicured lawn. She scampered like a high-strung ballerina, her well-muscled legs made a faint swishing noise as her spandex-covered thighs skimmed each other. To anyone watching, she probably looked utterly ridiculous with a ski mask covering her face.

She went to the left side of the mansion, knowing this had been the only way for her to go up. Climbing wasn't going to be easy, she could barely grip the ledges but it was too late to change her strategy now. She had a well-made plan and she needed to stick with it.

Caitlyn unlatched the heavy hiker's backpack she toted and dropped it in the damp grass. Unzipping it quickly, she retrieved her climbing shoes. The soles would grab the stucco exterior with ease. Next, she took out her small grappling hook gun and, without hesitation, shot the anchor over the top of the mansion. She cringed when it made a loud "cling" as it snagged a groove on the roof. Caitlyn paused, glancing up and down the sides of the mansion. Glad the guards hadn't heard, she slowly pulled the rope with a solid tug and smiled with satisfaction when it latched firmly to the overhang.

Moving stealthily up the mansion's exterior, her gloved hands kept a grip on the rope while her shoes dug into shallow grooves, rails, and gutter drains. Caitlyn panted with spent energy as more sweat poured down her spine.

She was a little unsteady and off-balance as she came to a window ledge on the third floor. It had been a few months since she'd so exerted herself, and she started to realize that too much time out of action had left her easily winded. But she had a pretty damn good reason for the long hiatus. Yet thinking about him wouldn't do her a bit of good while hanging thirty feet in the air.

She leaned to the side and peeked through the window which opened into Guillory's enormous office. The lights were off inside and the grounds below seemed clear of patrolling security, but she knew better. She had scoped this place out long enough to know he had an alarm through Sure-Safe, and that two well-paid personal guards made the rounds of his compound. It had been essential to know everything about Guillory and his home security. Since the age of seventeen, she'd been taught to always be prepared and organized with her jobs. Get the object, and call it a night.

She looked at the windowsill and saw the thin wire of Guillory's alarm system trailing along the frame. There was always a way to bypass an alarm, cameras, or even personal guards, but being the lone person on the job, it was impossible to do it all. At least not in the brief timeframe she allotted herself. In this case, she picked two tasks to focus on. For her, the main concern had always been the cameras, which had been one reason she wore the mask that covered everything but her full lips and caramel colored eyes. That left her to focus most of her attention on either the guards or the alarm. Cracking alarms wasn't her specialty and, since she wanted to do this heist alone, the alarm would be the one thing she couldn't waste time on.

She would focus on the guards.

Since Guillory's guards made him overconfident, the office safe should be easy to crack. Yet, it was a risk to rely wholly on that theory. Guillory could very easily have a safe that took hours to crack, but she bet against those odds. A room with a hidden safe would certainly be the first place the guards searched. She'd been in the thievery business for long enough to pick up on things like that. Feeling confident that Guillory's safe would be easy to crack, once inside, she focused instead on the guards. When the alarms began chiming, it wouldn't leave her much time before the police came, so she had to be quick.

Cutting the glass on the window, Caitlyn watched it tilt and crash into the room. Guillory had motion sensors throughout the house and the minute she slipped in, the countdown began. As anticipated, the alarm screamed from various hidden speakers on the property, floodlights shone radiantly on the shadowy yard below, and she heard the distant, muffled shouts of men inside the house. The small corner she had used to climb up was shielded from the flood lights but not for long, especially if the mounted cameras decided to make a tight scan.

Caitlyn dropped into the dark office and knocked the fake Monet painting off the wall behind Guillory's dark cherry wood desk. She quickly went to work on the safe, letting a small device scan the security code for the sequence of correct numbers. The process took time and could not be disrupted or she'd have to begin all over again.

She heard shouting and heavy footsteps, signaling that the guards were close by and heading her direction. Shrugging off her heavy backpack, she leaned it against the office desk she planned to use as a shield.

Caitlyn didn't like to kill. She relished the jobs that allowed her to go in, take an item, and leave lives intact. Using deterrents was another matter entirely. As the door to the room opened, the first mammoth-sized guard burst through, his gun aimed and ready to shoot anything that moved. Caitlyn's first dart hit his chest. He grunted, plucked the dart out, and stared in wonder at the empty vial at the end of it. The amount of tranquilizer in a single dart had been calibrated for a large animal, so it wouldn't take long before the serum caused him to black out, especially with his heart pumping adrenaline. He swayed slightly, took a backward step, tried to catch his footing, and went down with a heavy thud.

Wasting no time, Caitlyn took cover behind Guillory's heavy wooden desk. She still had a second armed guard to deal with. The tank of a man opened fire, shooting blindly into the room. Debris rained down as he unloaded his semi-automatic. When he ceased fire, Caitlyn peeked around the desk and watched as the man came warily inside.

About the Author:
A rocker by heart, Chacelyn Pierce is constantly ear plugged with heavy tunes blaring to stir up the phantom personalities that swarm her mind. It’s no surprise that she enjoys writing and reading to satiate her appetite for the male antagonist in a story. Married to a blatant redhead and mothering a diva, there is never a dull moment in the house. As a native Texan, she doesn’t personally own a horse but follows the unwritten southern rule of knowing how to ride one. When she’s not testing the emotional capacity of her characters, she works part time as a dog groomer.