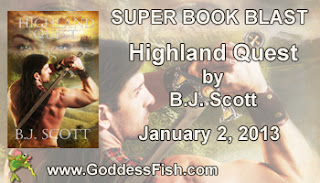 BLURB:
No longer content in the shadows of his older brothers and on a quest to find his destiny, Bryce Fraser's chosen path is fraught with danger, passion, and decisions. Can his unspoken love for spirited, beguiling Fallon be triumphant in a time of war and uncertainty, or will they both fall prey to the devious plans of a traitorous laird from a rival clan?
~~~~~~~~~~~~~
EXCERPT:
Loch Ryan Scotland, 1307
“Wa . . . water,” Bryce mumbled, but there was no one there to listen.

His throat was parched and he ran his tongue over dry, cracked lips, but his action offered no relief. An entire loch lay only a few feet away, but he couldn’t muster the strength to drag himself to the bank and quench his thirst.
“Cold . . . so cold.”
Despite the sun beating down on him, he’d swear he was encased in ice. His life’s blood seeped from his wounds, soaking the ground beneath him. He tried to raise his head, but the excruciating pain radiating across his chest stole his breath away.
Was this what it felt like to die? If so, he prayed the Almighty would be merciful and take him now.
Bryce moaned, a shift in his position bringing on another nauseating wave of agony. He sucked in a short, sharp, gulp of air and stretched his arm out as far as he could, his fingers grappling in the dirt.
If only I could reach my sword.
Beads of perspiration dampened his brow. As the strength slowly drained from his body, drawing a simple breath became more difficult. The end grew near. No time to make amends for sins of the past, and he had committed his share.
Regrets? He had those, too. “Fallon.” He whispered her name then heaved a ragged sigh.
~~~~~~~~~~~~~
AUTHOR Bio and Links:
With a passion for historical romance, history in general, and anything Celtic, B.J. always has an exciting work in progress. Each story offers a blend of romance, adventure, suspense, and, where appropriate, a dab of comic relief. Carefully researched historical facts are woven into each manuscript, providing a backdrop from which steamy romance, gripping plots, and vivid characters—dashing alpha heroes and resourceful, beguiling heroines you can’t help but admire—spring to life. A member of RWA, World Romance Writers, Celtic Hearts Romance Writers, and Savvy Authors, B.J. also writes contemporary, paranormal, time travel, and romantic suspense.

C.S. Lewis first captivated B. J.’s imagination in the fourth grade, and her desire to write sprang from there. Following a career in nursing and child and youth work, B.J. married her knight-in-shining-armor, and he whisked her away to his castle by the sea. In reality, they share their century-old home in a small Canadian town on the shore of Lake Erie with three dogs and a cat. When she is not working at her childcare job, on her small business, or writing, you will find her reading, camping, or antique hunting.
https://www.facebook.com/authorbjscott
http://www.authorbjscott.com/
http://authorbjscott.wordpress.com/
The author will award gifts of swag (including a canvas tote bag, a mouse pad, a pen, book thong, bookmark, can cooler, magnet, and key chain -- US/Canada only) to randomly drawn commenters from this tour and her Virtual Book Tour, and a grand prize of one $50 Amazon GC to one randomly drawn commenter from this tour and her Super Book Blast.


Please see http://goddessfishpromotions.blogspot.com/2012/12/virtual-book-tour-highland-quest-by-b-j.html for available dates on the regular tour.