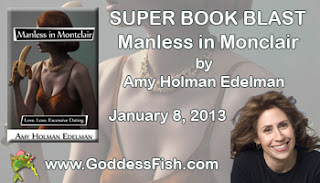 BLURB:
Being short with big boobs means living life off-balance. Isabel knows this all too well; at five feet nothing with a tendency to tip over in heels, she's struggled for twenty-five years to make clothes, careers and boyfriends fit. Enter Michael. Divorced father, recovering alcoholic and fifteen years her senior--he was the last guy she thought would make the cut. But when he proposed over a pastrami sandwich in a NYC deli on the anniversary of their first date, Isabel knew, improbably, that he was the one.

Fifteen mostly happy years and two kids later, Isabel walks into her living room to discover her husband dead on the floor, leaving her a widow at forty-one. At Michael's funeral, a guest solemnly informs her that the official mourning period for a Jewish widow is thirty days. At the moment, Isabel can't imagine a time when she will stop grieving. Not helping the process is this: as a single mom living in the very married suburbs, for the first time in fifteen years Isabel once again just doesn't fit in.

It takes her four year-old daughter's request for a new daddy to set Isabel on a journey through online dating, shifty matchmakers and painfully orchestrated single dinners. But after endless dates, a torrid affair with an unemployed, passive-aggressive neighbor and a story on page three of the New York Daily News, Isabel begins to realize that another man may not be the answer and, surprisingly, that's when things begin to change for the better...
EXCERPT:

Our blue and white paisley duvet lay crumpled on the bed, but Michael was no longer under it. The air conditioner beckoned me with a loud rumble, and I stood in front of it for a moment, letting the stale breeze cool my skin. Sufficiently chilled, I turned and walked back down the hall into the heavier air of our living room. It was then that I saw him, lying at the foot of the green overstuffed chair, a few inches away from his favorite perch on the well-worn, beige linen sofa. Except for the small pool of blood that had formed on the rug beside his head, he looked as if he might still be sleeping.
I ran past Michael to the far end of the room, my heart beating hard in my throat. I rummaged through the papers and notebooks that covered my desk in search of the portable phone. Finding it, I dialed 911. After what felt like enough time to grow old in, a dispassionate voice finally came on to the line.

“I think my husband is dead,” I said, shaking. There was no thought. Just words and sweat and panic. “What should I do?”


http://www.amazon.com/Manless-in-Montclair-ebook/dp/B00AI2FNV6/
Amy Holman Edleman is giving away a $25 Amazon giftcard to one randomly drawn commenter.
You can follow her tour at:
http://goddessfishpromotions.blogspot.com/2012/12/super-book-blast-manless-in-montclair.html