SBB: Revenge Of The Mad Scientist 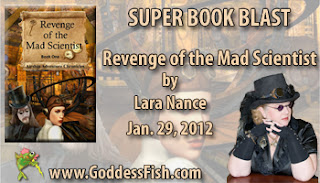 Blurb:
When Lady Arabella Trunkett’s father, the High Lord Minister of Urbannia is kidnapped, all clues point to the mysterious country of Gandiss and the world is thrown into political upheaval.

Arabella is convinced the more sinister nation of Carabarras is to blame, urged on by a mad scientist seeking revenge. So, she sets out on a perilous airship journey across a variety of exotic locales to save him, and halt the potential world war.

But airship pirates, secret assassins and slave traders aren’t her only trials. The fickle hand of fate has made the captain of the only airship available for charter, the man who left her at the altar. For eight years she's wished him dead. Now he's her only hope.
Excerpt:

Another scream sounded and then another. A group of people blocked her view and she didn’t hesitate in pushing them aside. She gasped when she reached a body sprawled on the floor and noted a trail of red blood tracking from a side room. She recognized the injured man as Conrad Bellows, her father’s assistant. Horrified, her champagne glass slipped from her fingers and shattered on the marble.

She pushed another man out of her way. What the hell was wrong with everyone standing around like statues while a man needed help? She knelt at Conrad's side. A knife protruded from his back but when she put her fingers on his neck she found him still alive, thank God. He struggled to his side and blinked as he looked up at her.

“Gone,” he whispered. “So…sorry, My Lady…gone.”
“Who is gone, Conrad?” She put a hand on his shoulder as panic shot through her.

“Ahh, all in black, don’t know…” He closed his eyes and then slumped on the floor, unconscious.

Belle sucked in a sharp breath. She jumped to her feet and spun around. “Someone call for a doctor and help Mr. Bellows. Where’s my father?”
AUTHOR Bio and Links:
Lara Nance grew up and lived in many cites throughout the South. She loves to write in a variety of genres, but the basis of all of her stories is a great tale that will take you on an adventure of imagination.

If you want to escape and lose yourself in a novel, you've come to the right place. Choose your genre and settle in to be entertained. From thrilling mysteries and steampunk tales, to paranormal romance and adventure, she's willing to explore a variety of compelling stories full of danger and suspense, along with a touch of romance. 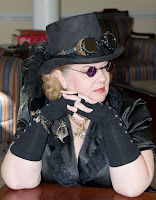 Having been on the fencing team in college and now living on a sailboat convinces her that she was a pirate in another life, or possibly kin to Errol Flynn… However, due to the unfortunate demise of the romantic pirates of the past, she lives out her fantasies, thrills and adventures in her stories. Lara loves to weave interesting true historical tidbits into her fiction which invite the reader to explore further after the novel is finished.

Currently docked in Norfolk, Virginia (until the wind changes) Lara enjoys living on her sailboat and spends time reading, of course writing, indulging a variety of artistic endeavors, cooking and sailing with her husband, Joe and their Yorkie, Rio.

Lara will be awarding an autographed original map of Arabella's steampunk world to a randomly drawn commenter at each stop, and a $50 Amazon gift card and an original steampunk necklace to a randomly drawn commenter during the tour.
If people sign up for her newsletter on her website from Jan 29 - Feb 3, they will be entered for an autographed copy of her book as well as an original steampunk necklace.
http://goddessfishpromotions.blogspot.com/2012/12/virtual-super-book-blast-revenge-of-mad.html
Posted by Sandra Cox at 4:00 AM

The novel sounds great to me!

Love this and can´t wait for my chance to read! =)
Happy Tuesday!
//Linda
fr_larsson at hotmail dot com

Wonderful excerpt, the title alone had me in anticipation of a great read, I'm going to love reading this one! :)

Arabella is a beautiful name, how did you chose it?

A MESSAGE FROM LARA NANCE:

Thanks for hosting me today! I hope you all love this story. You can actually download it FREE today and tomorrow if you have a Kindle app. Enjoy!!! XOXOX Lara

Thank you for the vivid excerpt and for making the story free on this day, I'm glad I picked it up!

Designing steampunk jewelry sounds like an interesting hobby, where do you take your inspirations for the designs?

Happy Tuesday Eve!!!
Wonderful comments! Thank you.
To answer Lana, Arabella's name popped in my head when I began imagining the character. It's just meant to be her name apparently...
Emiliana, I look for vintage pictures with a steampunk theme and cover them in epoxy, then add clock parts, jewels, etc. Sometimes I'll make clay creatures like the octopus in this necklace and add them to the mix. It's fun and a good break from writing occasionally...
Hope ya'll enjoy this story! XOXO Lara

Wow. You even make tiny clay octopus for your necklaces too. I really impressed.