With us today is Tom Mach to talk about his new book an Innocent Murdred and his character, Detective Matt Gunnison's view on religion:

In my murder mystery entitled An Innocent Murdered, Detective Matt Gunnison in working on a case involving the murder of a Catholic priest named Father O’Fallon. Gunnison does not consider himself a religious

man, although his father was a Methodist and his mother a Catholic. He treats the murder of O’Fallon as he would any other person and has no inclination one way or another concerning the identity of the victim as a Catholic priest. However, he believes—as does virtually everyone else—that the priest was a child molester, although the novel later uncovers facts that absolve the priest of any wrongdoing. He is comfortable about dating a former nun named Susan, although there is an episode in the novel where he becomes sympathetic to her situation. That occurs in the scene where Susan tells him she has never had sex with a man.

While Matt is not a churchgoer, he goes to an empty church (he didn’t care what denomination it was) after discovering the sickening truth about a young girl who had been strangled 25 years ago….

Once he arrived at the church, he headed for the last pew. God, I’m afraid I’m not much for prayer Matt thought. At first, he felt a strange sort of tranquility here. He wasn’t sure if it was the unearthly quiet of the church or the long shadows that the light cast through the narrow stained glass windows facing east. But soon different memories swirled in his head… how Billy, when he was four, wanted Matt to push him even higher on a playground swing. (“I want to break the record,” he said)…how the other first graders at school helped celebrate his sixth birthday by singing to him in class…how, when he was eight, he somehow got the basketball to fall into the net over the garage door from a distance of twenty feet (“No, Dad, it was skill, not luck.”)…how the shocking news came to him at the university, where he taught classes in criminal justice, that his parents and his son were killed when a semi failed to stop at a highway intersection and plowed head-on into the car.

Matt dropped to his knees, grabbed the edge of the seat with both hands, and bent his head.

Still facing the wall, the priest began to sob. “Can’t we talk about this?”

She slipped the Smith & Wesson into her pocket and removed a knife from her bag. “There’s nothing to talk about, you son of a bitch.”

He dropped his hands for a moment. “Please let me at least say a prayer.”

“Go ahead and beg for God’s mercy, you pervert!”

He made the sign of the cross with his crucifix. “Oh my God,” he muttered, “I am heartily sorry for having offended Thee.”

Tom Mach wrote two successful historical novels, Sissy! and All Parts Together, both of which have won 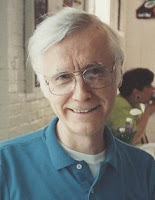 rave reviews and were listed among the 150 best Kansas books in 2011.Sissy! won the J. Donald Coffin Memorial Book Award while All Parts Together was a viable entrant for the 2007 Pulitzer Prize Award. He also wrote a collection of short stories entitled Stories To Enjoy which received positive reviews. Tom’s other novels include: An Innocent Murdered, Advent, and Homer the Roamer.

His poetry collection, The Uni Verse, won the Nelson Poetry Book Award. In addition to several awards for his poetry, Writer’s Digest awarded him ninth place in a field of 3,000 entrants. His website is: www.TomMach.com He also has a popular blog for writers of both prose and verse at http://tommach.tumblr.com

Father O'Fallon has been murdered, and police officer Jacinta Perez is arrested and charged. Detective Matt Gunnison, however, is not convinced and with the help of Susan, an ex-nun, he discovers a fascinating link between the priest's death and the death of a child 25 years ago. Will Matt be able to solve both murders? See video: http://t.co/H1siZOg

Contest alert: Tom will be giving away a $50 Amazon card to the person he feels leaves the best comment.

LINKS FOR VBT: AN INNOCENT MURDERED

Tour dates can be found at:

Thank you for hosting Tom today!

Thanks for hosting me today. I'm looking forward to any comments coming my way.

Thanks, Karen H. I always appreciate hearing from you.

Hi Karen, thanks for stopping by.
My pleasure, Tom and Goddesses.

I am enjoying this tour thank you.